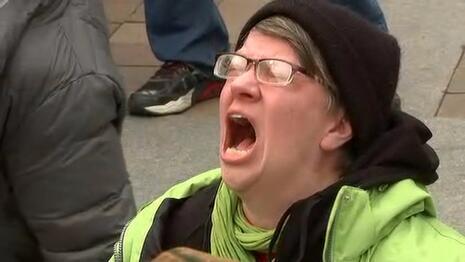 Your hunch is confirmed: lefties take politics way too seriously. And it’s not just that they can’t leave you alone, projecting ideology onto everything from what you do with your garbage to whether candy is sufficiently sexually ambiguous. They let it have an outsized role in their own personal lives.

Don’t take my word for it. New York Times columnist Michelle Goldberg has a January 21 piece on “The Mental Health Toll of Trump-Era Politics” (We’re now a year into the Biden Era, but the guy in Mara Ego won’t mind. He was never reluctant to stamp his brand on anything.)

“In the last few years the hideous state of our politics has often kept me up at night,” Goldberg writes, “but until recently I thought I was an outlier.” If only.

She goes on: “Even when I’ve written about political despair as a problem for Democrats, I assumed it was something that applied to activists and base voters, the sort of people who go through their days silently cursing Joe Manchin.” Democrats control two of the three branches of government, 22 of the 50 governorships and have mostly had a free hand destroying America’s major cities. In 2020, they banished the hated Trump and some of his more misguided partisans handed them a giant club on January 6. Doesn’t seem like a recipe for despair.

But Goldberg’s point is that it isn’t just drones like her who have the political sads. “A striking new study from Kevin B. Smith, chair of the political science department at the University of Nebraska, Lincoln, suggests the universe of people who find our politics a torment might be much larger than I’d realized.”

“Around 40 percent of Americans, he found, ‘consistently identify politics as a significant source of stress in their lives.’ Shockingly, about five percent have considered suicide in response to political developments.”

Umm. Look, about five percent of sports fans will tell you they’ve considered offing themselves after losses (among Mets fans, it’s probably more in the neighborhood of 15 percent). A few may even be serious. But if you’re considering ending it all over tax credits or fossil fuels, you really shouldn’t be out on the streets.

“People from both parties reported that political stress during the Trump years has damaged their health,” says Goldberg, “but Democrats have, unsurprisingly, had it worse.” No, it’s not surprising, but I don’t think it’s for the same reasons she thinks. “While Donald Trump was in office, [Democrats] were able to turn their rage and fear into fuel, but I’m not sure how sustainable this is. The more politics becomes a pageant of infuriating Democratic impotence in the face of relentless right-wing spite, the more I fear people will disengage as a means of self-protection,” she wailed.

Yeah, it’s not for the reasons she thinks. “Rage and fear.” “Impotence.” “Spite.” These are not the words of normal people. Goldberg knows that, and she’s unembarrassed.

There really are normal people. “As the political scientists Yanna Krupnikov and John Barry Ryan wrote in The New York Times, most Americans — ‘upward of 80 percent to 85 percent — follow politics casually or not at all.’”

She’s just not one of them:

Of course, the last thing a political scientist — or, for that matter, a liberal columnist — would tell you is that you should totally tune that noise out. It is depressing to live in a dying empire whose sclerotic political institutions have largely ceased to function; this is a collective problem without individual solutions. There’s an awful dilemma here. Any way out of the gloom of our current political situation will almost certainly involve even more politics.

Oy! A couple of days ago, a random woman on Twitter wrote (as close as I can remember – she blocked me after I responded): “I’m on board with a boycott of Starbucks if they won’t demand their workers are vaccinated. Our health is too important not to advocate for.”

Bet she's really fun at parties. But who talks like that?