The new battle over education is another example of how different things look depending on your distance from the Beltway. 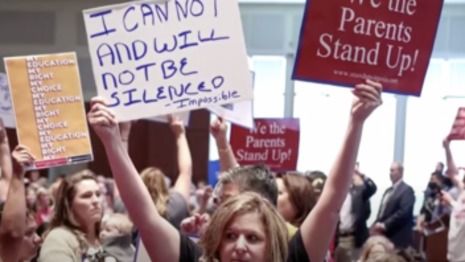 The Washington Post (motto: “Democracy Gets Drowsy at Dusk”) is always a reliable guide to the current Enemies of Progress  -- Tea Partiers, pimply little Arians, conservative churches. And right now, the skunk at the vegan BBQ is … parents.

Parents electing conservative school boards may stand in the way of brave teachers trying to dismantle the systemic racism of third grade. Parents have been showing up to school board meetings and making a terrible racket. They smell of Hamburger Helper and rage.

Allegedly, some have been stupid and irresponsible enough to threaten school board members, causing an anguished plea from the National School Boards Association to the Biden Justice Department. AG Merrick “We Dodged a Freakin’ Bullet” Garland complied, scrambling the feds to root out “harassment, intimidation, and threats of violence against school administrators.” Parentes delenda est.

But out in the sticks, things look a little different. Accusing concerned moms of  “a form of domestic terrorism and hate crimes” doesn’t play in Peoria. Or Madison. According to the Wisconsin Examiner: “On Tuesday, Nov. 9, the Wisconsin Association of School Boards (WASB) announced it was suspending participation with the National School Board Association (NSBA).” It added that this may be the first step in formally leaving the national group.

Apparently, the Badgers aren’t as enthusiastic about cracking parental heads as the gang in DC. “A WASB memo to school board members around the state that the actions of NSBA ‘do not align with WASB policies and programs nor its mission to support, promote and advance public education’” the Examiner said.

If the Wisconsin group splits, it will join school board groups from Missouri, Ohio. Pennsylvania, New Hampshire, Tennessee, South Carolina, Kentucky and Montana. The Examiner also said that “a conservative school board in Rapid City, SD, issued a statement saying that, if its state organization did not pull out of the national association, the city’s school board would consider pulling out of the Associated School Boards of South Dakota.”

Of course, the Examiner noted that “the liberal Massachusetts state school board association sent an email to NSBA stating that it was ‘very happy’ that the national board ‘reached out to the FBI.’” Of course it did. And a lefty prof from the University of Massachusetts said that the national conservative group Parents Defending Education “combines white supremacy with a vicious plan to launch personal attacks on elected officials, administrators, and teachers.”

So there we have it. On one side, parents, some local associations, and a national group nobody’s ever heard of. On the other, the Biden Justice Department, the education and health bureaucracies, the teachers unions and the media.