It’s nice that USA Today has found an identity after all these years. It never managed to be a real newspaper, and since few business travelers tote along their gerbil cages, it never really became useful to anyone. 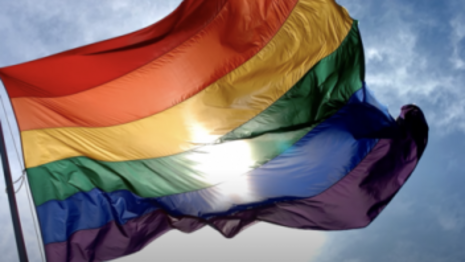 But these days, USA Today is thriving as a PR shop for the gay agenda. On Nov. 3, Entertainment Reporter David Oliver took dictation from GLAAD for a piece in the “Health and Wellness” section fluffing the group's annual Accelerating Acceptance Study.

Here’s the good news: Ubiquity is having the intended effect. You can’t swing a leather speedo in popular culture without hitting a brave lifestyle trailblazer living his/her/their truth, and “Increased visibility educates non-LGBTQ people,” according to Oliver.

So, “The report found that 43% of non-LGBTQ people think gender is not exclusively male and female, up from 38% in 2020,” Oliver typed.

"Our community continues to grow, and we're seeing some growing acceptance of that," says Sarah Kate Ellis, GLAAD CEO. "We are seeing that the concept of gender, in terms of non-LGBTQ Americans, is evolving." A poll earlier this year found that 5.6% of adults in the U.S. identify as LGBTQ – a record.

Woo-hoo! Keep reaching for that rainbow!

So, you celebrate and reward a behavior, you get more of it. (You may wonder how the “growing community” squares with the “born this way” argument we were supposed to accept last week -- maybe more fluoride in the water? -- but shut up, you bigot.)

But all is not unicorns and free condoms. “Among non-LGBTQ people,” Oliver says, “45% admit they are confused by all the different terms to describe people in the LGBTQ community.”

It’s true. Normal folks have trouble keeping up with the abnormalities the activists keep inventing. You add enough cars to the LGBTQXYZLMNOP freight train and those of us stuck at the road crossing as it goes by are bound to lose count.

"'Anti-trans legislation are solutions to problems that don't exist,' Ellis says. 'There's no problems to solve that we need to be legislating against in the first place.'" Just ask Loudon County parents.

And who's facing the consequences most harshly? Kids. "It's creating confusion for so many people, which creates an unaccepting environment, hands down, and puts targets squarely on the backs of most of our youth in our community, (especially) our trans youth," Ellis says.

Yeah, confusion is the pits. Thankfully, we have singers and actors to bring sanity to this topsy-turvy world. “Celebrities, of course, can make a huge difference for LGBTQ young people,” Oliver says. “More than 80% of LGBTQ youth said celebrities who are LGBTQ positively impact how they feel about their queer identities, according to research from The Trevor Project.”

So we should all relax and let Lady Gaga raise our kids. What could go wrong?