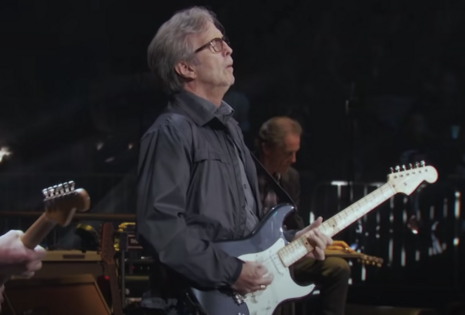 When it’s not publishing lies about college rapes and hicks swallowing horse medicine the once-cooler than you’ll ever be chronicle of counterculture is cracking heads for Biden and Boris. Clapton had a bad experience with one of the vaccines, and he’s using his platform to warn people about it.

Bad idea. Rolling Stone has archives, and they’re not afraid to use them. In an article titled, “Eric Clapton Isn't Just Spouting Vaccine Nonsense—He's Bankrolling It,” Rolling Stone couldn’t simply disagree with Slowhand, explain why he’s wrong and that his fans should be skeptical about his claims. No, the Blues Breakers, Cream, Derek & the Dominoes guitarist must be punished.

During a 1976 concert in England, Clapton said some impolitic things about immigration to Britain and used what Rolling Stone calls “offensive slurs.” Did I mention this was back in 1976?

Clapton long ago apologized and blamed it on his drinking. Which seems kind of reasonable, and given that the incident was in 1976 … Hah! Rolling Stone anticipated your weak-willed forgiveness and found somebody who was at that concert 46 years ago to tell you what a bad guy EC really is. “Drink just makes you tell the truth too loud at the wrong time to the wrong people,” according to English Beat founder Dave Wakeling, who was there in 1976.

And Clapton who “spent a lifetime appropriating black music,” said some “stomach-churning” things back in a 1968 interview. Explaining British audience reaction to his friend Jimi Hendrix, he said “Everybody and his brother in England still sort of think that spades have big dicks. And Jimi came over and exploited that to the limit, the fucking tee. Everybody fell for it.”

Well, consider my stomach churned. Clapton used a common (at the time) racial epithet and explained what he thought English people thought. Not very classy, maybe not very smart, but acceptable in a different time and context. Anybody who’s read rock journalism from the 60s and 70s knows musicians and the people interviewing them spoke very differently than they do today.

But that doesn’t matter to the current gang of propagandists at Rolling Stone. All they know is Clapton stepped out of the vaccine line and their job is to make sure everyone knows he’s one of those MAGA-hatted, science-denying racists.