What if they threw an Olympics and nobody watched? NBC execs are finding out. They have a ratings disaster on their hands. The network has broadcast the Summer Games since 1988, and the ratings have never been as dismal as Tokyo 2021.

Over 17 days of competition NBC’s viewership averaged 12.9 million during primetime. That’s down 49 percent from Rio in 2016 and 58 percent since London in 2012.

According to Fox News:

NBC Sports chairman Pete Bevacqua said the network was "thrown a series of curveballs over the last 18 months" as the coronavirus pandemic delayed the games by a year, forcing the Olympics to go on in empty stadiums and initiate widely criticized protocols. In addition, a variety of high-profile athletes had to bow out after testing positive.

And NBC itself screwed up:

Potential viewers also complained about events being hard to find on an assortment of viewing options, confusion about streaming service Peacock, and a significant time difference causing major events to air on tape delay during an era when mobile alerts and social media make spoilers inevitable.

And then there’s the politics. All the talk in the weeks leading up to the games about whether the IOC would allow political protests and what kind drove away viewers -- just as NBA and NFL fans have been repulsed by the Black Lives Matter grandstanding. 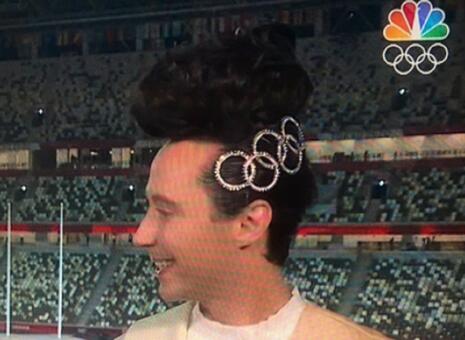 U.S. hammer thrower Gwen Berry had a tantrum when she was subjected to the national anthem on the podium during a qualifier last month. The USWNT started the games by kneeling (and losing). The opening ceremonies inflicted John Lennon’s insipid communist anthem “Imagine” on viewers, and we were treated to the farce of the IOC pretending it was okay that a New Zealand man competed in a women’s weightlifting competition.

Still, NBC did its best to rescue the situation by having the closing ceremonies covered by someone all viewers can relate to. This guy.