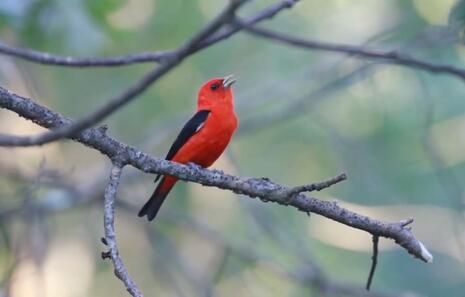 Washington Post Editor: “We’re not stirring enough woke outrage. Who haven’t we smeared as racist yet?”

Washington Post Editor: “Genius! Get me 2,000 words on bird bigots.”

You don’t think that’s how decision-making is done at The Post? Well how else do you explain “The Racist Legacy Many Birds Carry?” It’s a long June 3 piece by Darryl Fears that tackles “The birding community’s … difficult debate about the names of species connected to enslavers, supremacists and grave robbers.”

So they’re havin’ a go at the birds now. The problem seems to be that birdwatching isn’t immune to wokeness and the deeply stupid pieties that come with it. Therefore ornithologists may need “to change as many as 150 eponyms, names of birds that honor people with connections to slavery and supremacy.”

Fear wrote: “Even John James Audubon’s name is fraught in a nation embroiled in a racial reckoning.” It seems the great bird artist and cataloger owned slaves and didn't think much of emancipation. “Some of his behavior is so shameful that the 116-year-old National Audubon Society — the country’s premier bird conservation group, with 500 local chapters — hasn’t ruled out changing its name.”

“I am deeply troubled by the racist actions of John James Audubon and recognize how painful that legacy is for Black, Indigenous and people of color who are part of our staff, volunteers, donors and members,” interim chief executive Elizabeth Gray said in a statement in May. “Although we have begun to address this part of our history, we have a lot more to unpack.”

How about you leave it packed and go back to watching birds? It’s an option. Maybe it’s all the public hand-wringing that’s making the legacy painful for black, indigenous, etc. Maybe those people just want to see a belted kingfisher or an American yellow warbler. Maybe they’re healthy, well-adjusted individuals who understand that, however odious Audubon’s views on slaver are, his contributions to the science and study of birds is worthy of acknowledgement.

Apart from Audubon, “The Townsend’s warbler and the Townsend’s solitaire still invoke John Kirk Townsend, whose journals detail his exploits in traditional Native Americans burial grounds in the West,” said Fears. Townsend dug up indian skulls and measured them.

“The Wallace’s owlet and five other birds honor Alfred Russel Wallace, a British naturalist, explorer and anthropologist credited, along with Charles Darwin, for conceiving the theory of evolution through natural selection. Wallace’s writings frequently used the n-word.”

Fears quoted J. Drew Lanham, “a Black ornithologist and professor at Clemson University in South Carolina”: “Conservation has been driven by white patriarchy,” this whole idea of calling something a wilderness after you move people off it or exterminate them and that you get to take ownership.”

There you have the issue, such as it is, in a nutshell: resentment. The crimes of Audubon et al don’t matter. Wokies are simply angry they have to use names they (or people that look like them) didn’t come up with. They hate that history has ordered the world a certain way and they harbor the jacobin dream of starting over from Year Zero.

Birdwatching is now a profoundly political act. Bird-brained? You bet.