Now that he’s is the official Republican nominee, the Trump bashing is soaring to new heights.

On Wednesday night’s episode of The Late Late Show, host James Corden teamed up with comedian Denis Leary to sing a new song: “Trump’s An A**hole.” 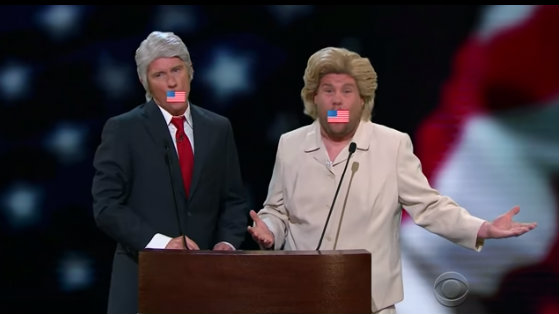 The skit was an updated version of Leary’s 1993 sketch where he used the term for himself. But in 2016, the song is all about Trump.

Posing as Bill and Hillary Clinton, white pantsuit included, the pair explained that they wanted to sing about “that special feeling we all get when [Donald Trump] speaks.”

Before really digging into Trump, the “Clintons” made fun of themselves, joking about Bill’s affairs and Hillary voting in favor of “Don’t Ask Don’t Tell.” But now, Hillary is “just a girl fighting for common sense.”

However, despite all of the Clintons’ flaws, “no matter how bad we can be, we’ve never said Mexicans are rapists on TV.”

They went on to warble about the many things Trump has done that the Clintons have not, like “I’ve never asked Russia to hack the USA.” And “he won’t show his taxes, he won’t even try. He’s kickin’ out babies when they start to cry.”

And periodically, the two broke out into the chorus of “Trump’s an a**hole.” Which, they didn’t sing just once. Or twice. But a resounding 29 times. The censors could hardly keep up.

And in keeping with the idea that the Clintons are “good marriage role models,” ‘Bill and Hillary’ (men Corden and Leary) shared a passionate kiss at the end of the song.

Both men have made their political opinions known in the past. Earlier this year, Corden made a jab at Trump’s wall while hosting the Tony Awards. And Denis Leary once said that “I think that President Obama is the greatest President in the history of all of our Presidents and that he can do no wrong.”

With that in mind, don’t hold your breath for a song about the things Hillary has done.