The Huffington Post has reached a new level of despicable. While the families of five murdered Dallas police officers were still reeling after the attack from a racist sniper, the front page headline of that embarrassing publication compared police officers to the ruthless Chinese government responsible for the Tiananmen Square massacre.

The headline read “Look At U.S. Now” and was printed above a photo that is garnering media attention. The implication was that the U.S. police force is now as brutal as the Chinese government. 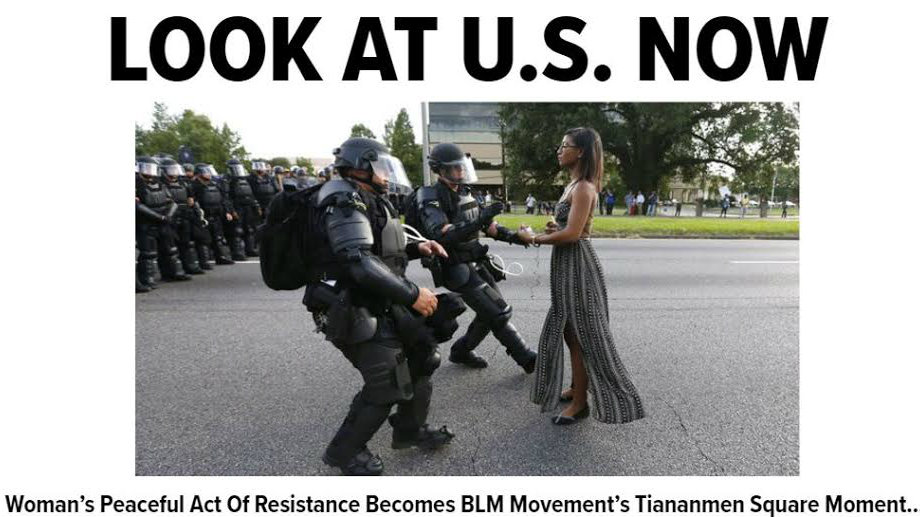 The photo, taken at a protest in Baton Rouge over the weekend, is being lauded as the new “Tank Man” photo from the 1989 pro-democracy Chinese protests by numerous media outlets, including HuffPo.

New York Daily News called the photo “stunning” and The Atlantic described it as “hard to forget.” The Washington Post wrote that the woman was “graceful in the lion’s den.” Even the BBC weighed in, calling it a “legendary” image.

HuffPo recognized that their original headline was grossly inappropriate, because they have since changed the headline to “Moment of Truth.”

Though that’s hardly better! It still implies that the “truth” is that police are a violent tyrannical government force.

The “truth” is that the woman was not about to be run over by a tank. Or gunned down by 300,000 Chinese troops. Or burned and lynched as a warning against free speech. But as usual, the lefty media doesn’t care about truth. 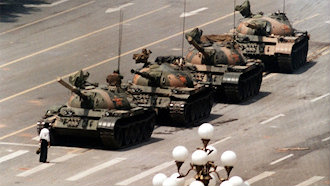 The realities of the Black Lives Matter protests and what happened in China are incomparable. In 1989, the Chinese government mowed down thousands of students in a bloody show of power in order to stamp out a protest. And it’s not as if that’s the only time the Chinese have used force to silence free speech. To say that U.S. police officers, who protect the right to protest, even when the protests are focused against them, are akin to the murderous Chinese government is an egregious comparison.

These “evil” police officers were attempting to move the woman and her fellow protestors off of a busy 3-lane highway before someone got hit by a car. The Chinese would’ve just watched. Where’s that “truth?”