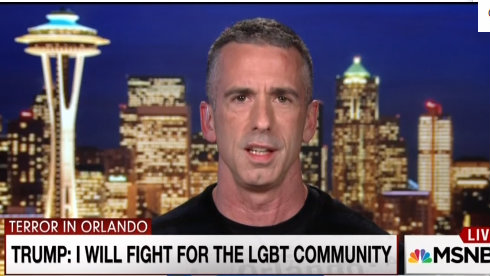 In an interview with Chris Hayes on MSNBC, gay-activist Dan Savage said that “Trump is the enemy of the LGBT community” and “is beating up on…a vulnerable minority group.”

The anti-Christian bigot observed that the shooter could have been both a radicalized Muslim and a self-loathing gay man. This is because many LGBT “are self-loathing because of religion.” Got that? Religion. Not Islam specifically. Religion in general.

Earlier this year, Savage claimed that if Trump were to become the GOP nominee, “black and brown people” would die. And now he’s adding LGBT people to this list.

Savage is the inspiration behind ABC’s Catholic bashing show The Real O’Neals and authors a sleazy sex column that is published in 50 different papers. Insulting Christians and conservatives is practically a hobby of his. He once told Ben Carson to “suck my dick” and expressed a wish that Republicans were “all fucking dead.” And when Pope Benedict retired, Savage called him the “Motherfucking Power-Hungry, Self-Aggrandized Bigot In the Stupid Fucking Hat.”

Savage, in his own endearing-to-liberals-only way, is just following the lefty media’s plan to blame Orlando on everyone and everything except the actual Muslim shooter.