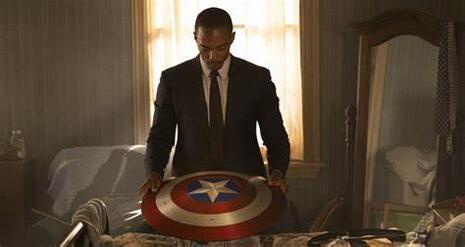 Marvel’s latest series The Falcon and the Winter Soldier has proved to be the polarizing propaganda the media hoped it would be. Now on its penultimate episode, the Disney+ series is stepping things up by asserting that nothing's changed in 500 years and no black man should want to be Captain America.

The April 16 episode “Truth” follows directly after last week’s devastating cliffhanger of John Walker (Wyatt Russell), the current Captain America, brutally killing a foreign citizen in public. Out of desperation, Sam/The Falcon (Anthony Mackie) and his partner Bucky Barnes/The Winter Soldier (Sebastian Stan) team up to subdue him and take the signature shield. They successfully have him apprehended by government authorities, but Sam debates what to do with shield, which originally belongs to him after the events of Avengers: Endgame.

Conflicted, he goes to visit Isaiah Bradley (Carl Lumby), an original test subject for the super soldier serum that made Captain America. Isaiah, however, is bitter about the symbol of Captain America, referring to it as a “white man’s shield.” When Sam tries to persuade him to tell his story to the public, Isaiah shows his true feelings about his own country:

Isaiah: "You think things are different? You think times are different? You think I wouldn’t be dead in a day if you brought me out? You wanna believe jail was my fault because you got that white man’s shield. They were worried my story might get out, so they erased me, my history. But they've been doing that for 500 years. Pledge allegiance to that, my brother. They will never let a Black man be Captain America. And even if they did, no self-respecting Black man would ever wanna be."

Aside from the Julia Louis-Dreyfus cameo in the episode, this moment had plenty of media sites going crazy over what’s referred to as a “landmark moment,” calling Isaiah’s history “heartbreaking, enraging and – sadly – wholly believable.” The show once again seems determined to act like America was, is, and always will be racist in some way, even if we’re nowhere near as discriminatory as we were in the 1940s and '50s.

This whole point becomes moot since Sam indeed chooses to take up the shield and presumably will become the next Captain America. All that means is that this scene was just lip service to a bunch of social justice warriors who likely never cared about Captain America in the first place. Let’s hope the finale isn't worse than this.