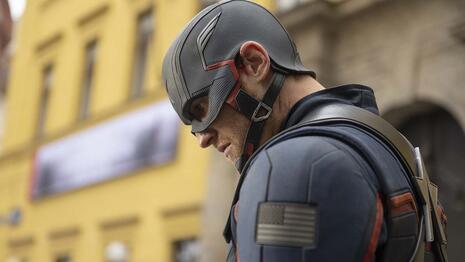 *Spoilers for The Falcon and the Winter Soldier and Avengers: Endgame*

The Marvel series follows the heroes Sam Wilson/Falcon (Anthony Mackie) and Bucky Barnes/Winter Soldier contending not only with a group of global terrorists known as the Flag Smashers, but a new government sponsored Captain America in the form of John Walker (Wyatt Russell). Considering Sam was the original owner of the shield after original hero Steve Rogers handed it to him in Avengers: Endgame, this quickly turns into a discussion of being Black in America, as the second episode shows.

However, now we’re onto a new topic as The Hollywood Reporter writer Richard Newby dissects the latest episode. You see, April 9’s episode “The Whole World is Watching” ends with Walker, faced with the death of his friend and partner Lemar (Cle Bennett), taking a vial of Super Soldier Serum (the thing that gives Captain America his stamina) and brutally murdering a member of the Flag Smashers in revenge. Such a shocking display of violence apparently reveals the “tragic truth” of America:

Walker, as viewers soon find out, enhanced by the Super Soldier Serum only, becomes more insecure, more aggressive and more convinced in the moral superiority of his own government. And the death of Lemar, killed by the Flag-Smashers, unleashes something else: a walking mascot for America, the real America, in all of its carelessness, cruelty and displaced sense of justice. John Walker essentially becomes, true to his comic book moniker, a U.S. Agent.

According to this article, even the Captain America we knew and loved “represented a country that did not, and does not exist, in the MCU, or in reality.” This latest display from the new Captain America only proves it. Allegedly, “truth, justice and freedom aren’t concepts exclusive to America, and as tenets, they don’t even work particularly well for the majority of Americans.” The latter line obviously applies to the idea that America is super unforgivably racist despite the fact that Marvel clearly spent millions of dollars on a series fated to make Sam Wilson, a Black man, the next Captain America. Clearly the multi-billion-dollar company doesn’t think Americans are too racist.

Sadly, even that prospect doesn’t appeal to Newby who writes:

Can there be a new Captain America when America itself, as a whole, does not represent goodness? Is the best we can hope for a Captain of Nothing? If Sam Wilson is ultimately going to take up the shield and the mantle, then he’ll have to do so with the acknowledgment that America as it exists is a failure, the opposite of supreme. He’ll have to become a Captain America that isn’t grounded in past ideals, but one grounded in an America yet to be, one that must be created through enacting real and immediate change, by defying borders, and moving the world by healing it.

This final paragraph in the article sums it all up: America is not good, and Captain America cannot be good unless he acknowledges it. Canceling Captain America right when a Black man is about to take the mantle? And the Hollywood Reporter thinks America is the racist one.

I can’t say whether Marvel entirely agrees with this interpretation, but considering its comics division is having Ta-Nehisi Coates portray Jordan Peterson as an evil Nazi supervillain, I doubt it’s far off. Essentially, the only villain in this show for this article is America itself. Let’s hope they don’t mind losing viewers.