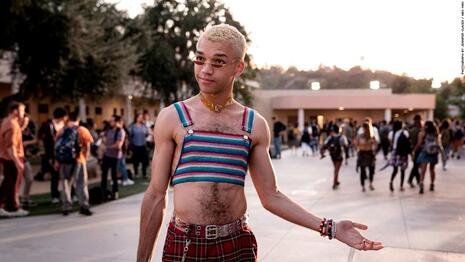 The March 18 episode “Pussy Problems” features a meeting of the Gay Alliance club at the high school. There, the teens are discussing where to go for a trip. Delilah (Lukita Maxwell), the usual woke teen of the bunch, shoots down the idea of Disney World for being, of all things, “transphobic.” That’s already rich considering Disney’s countless attempts to kotow to the woke crowd, but the scene continues.

Chester (Justice Smith), the Black queer athlete of the group, then pipes up agreeing with Delilah. Not necessarily about Disney, but more on the progressive attitude of it all. Then he drops what’s supposed to be a bomb, but probably not in the way that he thinks:

I’m on this whole thing right now about the history of humankind, I just have to say, we are living in a bubble. Like I'm sick of all this short-term memory. We're like 'Oh I would never let there be concentration camps,' and like we're literally putting kids in cages now.

While this was obviously filmed a while ago, it’s nothing less than delicious irony to bring up the Trump-era “kids in cages” narrative right in the midst of the Biden administration putting kids in cages (which was started by Obama). Unfortunately for them, Generation’s desire to fictionally dunk on Trump might unintentionally point viewers to the very real border crisis media pundits and Biden officials are trying to deny.

Also outdated: comparing contemporary politics to the Holocaust is now considered "anti-Semitic" and gets you canceled. Oh, wait, that's only if you're not a woke leftist.