Election Day 2020 is sure to bring out all the crazies and getting things started is our resident crazy Keith Olbermann. In his final diatribe against Donald Trump on Twitter before the election, the former MSNBC host tweeted out that the president is a “whiny little Kunta Kinte.” If you think that already sounds bad, just wait. 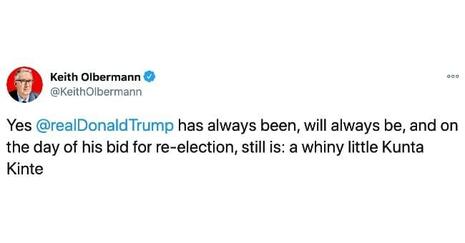 Like dozens of media personalities, Keith Olbermann has been putting out his unwelcomed opinions on Twitter which basically boils down to “Orange Man Bad.” However, his November 3rd one might be the most bizarre. In response to Trump’s morning interview on Fox & Friends, Olbermann tweeted out “Yes @realDonaldTrump has always been, will always be, and on the day of his bid for re-election, still is: a whiny little Kunta Kinte.”

Considering Kunta Kinte is the name of the lead character in Alex Haley’s slave drama Roots, let’s just say this tweet comes a little on the racist side. That is, unless we’re supposed to think that slaves are just “whiny.”

i don't understand this tweet but it's racist https://t.co/eNZ2wmXye7

I've seen enough: I'm ready to declare this the victor of the worst tweet of election day contest. https://t.co/Bxsn3wWzqk

Of course, Olbermann later deleted the tweet but managed to bury himself even deeper. He explained in a follow-up tweet: “I apologize for my previous subtweet of this. I was using an old 70's-80's technique for calling somebody a c*** without writing/saying c***, just using a sound-alike to call Trump a c***.”

Just logged back in: I apologize for my previous subtweet of this. I was using an old 70's-80's technique for calling somebody a c*** without writing/saying c***, just using a sound-alike to call Trump a c***

Deleting previous, largely because this one clarifies the c*** part https://t.co/hIIrt1Ke17

Sadly for him, no one’s buying it. Most notably, former Roots star LeVar Burton, who portrayed Kunta Kinte, called out Olbermann himself:

Dear @KeithOlbermann, #Kunta is pronounced with a long “u” as in unity, not a short “u” as in cup.

The actor even later changed his profile pic to his Roots character as a result.

Keith Olbermann should learn to manage his Trump Derangement Syndrome online. After all, the election is still young.