Based on the John Green novel with the same name, Hulu’s teen drama Looking for Alaska recently debuted on October 18. Like most teen shows nowadays, it’s chock-full of sexualized teenagers making poor life choices such as drinking, smoking, and viewing pornography for pointers. This time, however, we’re also surprised by a random appearance from Congresswoman Alexandria Ocasio-Cortez. 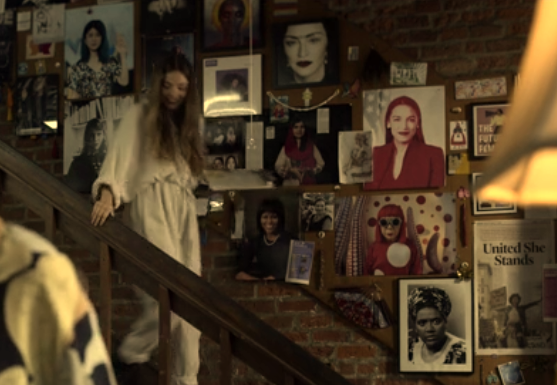 Set in 2005, the show follows teen Miles “Pudge” Halter (Charlie Plummer) as he attends a new high school. During his junior year, he meets a multitude of characters including his roommate Chip “The Colonel” Martin (Denny Love), Colonel’s friend Takumi Hikohito (Jay Lee), and the free-spirited Alaska Young (Kristine Froseth). Predictably, Miles and Alaska begin to fall in love, but, of course, tragedy strikes when they least expect it.

Alaska above all things is a self-proclaimed third-wave feminist. That mostly consists of her dropping jabs against the patriarchy and the male gaze that were probably still annoying back in 2005. Her politics aren’t limited to men either, as she criticizes pretty much everything. She describes Thanksgiving as “Native Americans gave us maize and yams, and we gave them smallpox.” Debutante balls are “paternalistic,” “misogynistic,” and “literally the epitome of white privilege.” She can’t even resist herself during Thanksgiving dinner by commenting how she would normally “not allow the cooking to be left to the women.” Remember, she’s supposed to be the prize here.

Then, for some reason, the show suddenly shifts to Alaska’s fantasy of a perfect future in another decade, or rather present day. In that time, she owns a feminist bookstore which contains books written only by women and “white male authors we approve of.” To further prove her feminist cred, she envisions posters all over the wall of icons including the Green New Deal czar herself Alexandria Ocasio-Cortez and former First Lady Michelle Obama.

Somehow, this show wanted to make some kind of reference to modern politics even though the series takes place in 2005. Rather than just let that go and tell a story, it had to create a scenario to force a freshman congresswoman’s image on our screens. Not only that, it wants us to believe that she’s a figure on par with Malala Yousafzai in terms of successes or inspirations when her biggest piece of legislation couldn’t even get one vote in its favor. If I ever took this show seriously before, it certainly ended with that poster in episode six.

Looking for Alaska is no Euphoria or 13 Reasons Why, but that hardly makes it quality television. Even without gratuitous nudity or glorifying suicide, these teens remain pretentious, self-destructive, and altogether obnoxious role models for any young people watching. And, considering they see Alexandria Ocasio-Cortez as an icon, the future looks bleak.