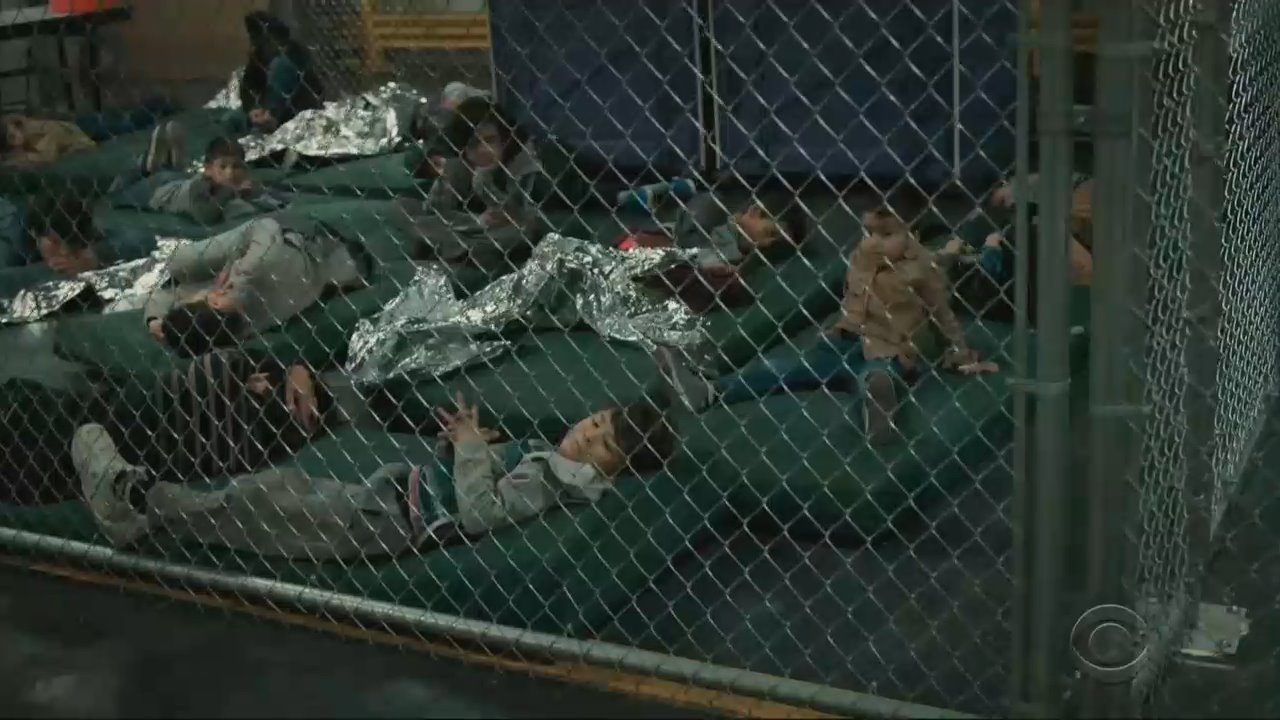 CBS’s Madam Secretary is proving to be the real Grinch this holiday season. In addition to premiering its 100th episode less than 48 hours before Christmas, it proceeds to feature a plot on family separations at the border. Somehow, I doubt anyone’s heart will grow three sizes after this day.

The December 23 episode “Family Separation: Part 1” begins right off the bat with an exhausted mother and child crossing the Mexican border. Right after the two make it to the U.S., Arizona police officers take them into custody and quickly take the child away from the woman. The woman tearfully begs them to let her see her son, but the officer refuses on account that she “has no rights here.” Meanwhile, her son is taken to a bus filled with other crying Mexican children wondering where their parents are. Strap yourselves in, everyone, because it all goes downhill from here.

The situation grows even worse when President Dalton (Keith Carradine) and Secretary of State Elizabeth McCord (Téa Leoni) discover this action was caused by Governor Richard Barker (Lee Tergesen) of Arizona. Because of the problems regarding illegal immigration, Governor Barker recently enforced a policy that strengthens state activity in defending the border, as he stubbornly explains here.

Dalton: Are you really separating children from their parents?

Barker: It's called enforcing the law. You ought to try it some time, Mr. President.

Dalton: Oh, you can count on the attorney general and me enforcing the law.

Dalton: It is when you encroach on federal immigration policy.

Barker: My AG tells me I'm on firm legal ground.

Elizabeth: But Governor, forget the legal argument. Your new policy, besides being inhumane, is already jeopardizing our border security deal with Mexico. A deal that your state stands to gain from.

Barker: Says who? I say it will endanger the good people of Arizona. After that shameful immigration debacle you people jammed through Congress last summer, you forced my hand here.

Dalton: Governor, if you're trying to kill the border deal...

Barker: I am trying to deter future illegals. If it spoils your little deal, all the better.

Elizabeth: Okay, I'm sorry. Y-you're taking children from their parents as a deterrent?

Barker: Someone had to grow a pair, ma'am.

Dalton: Do I really have to explain to you how barbaric and un-American that is?

Barker: If you're gonna make deals with Mexico, you got to be tough. Now, I'll consider backing off the separation policy if you get lower immigration caps, higher thresholds for asylum seekers and Mexican support for construction of a border wall.

Dalton: You don't get to call the shots here, Governor.

Barker: You don't get to call the shots here in Arizona. We're done.

Obviously the Arizona governor is supposed to sound like Trump, calling for higher thresholds for asylum and Mexico to support the wall, but this confrontation also resembles Arizona SB 1070, or the Support Our Law Enforcement and Safe Neighborhoods Act, the real-life law signed by Governor Jan Brewer in 2010 that President Obama opposed.

Despite the separation being called “an affront to basic human dignity,” Governor Barker stands by his policy in order to leverage the Dalton administration for tougher border restrictions. One thing that becomes clearly evident from this scene is that anyone who wants stronger border security is an evil partisan willing to risk children’s lives for a political win.

Case in point, when the administration attempts to receive an injunction regarding the children, Judge Mayfield (Philip Casnoff) refuses to hear the case. Moreover, he appears to agree with the state attorney general who reminds him that “The fact of it is, children are legally separated from their parents all the time…when the parents are imprisoned…when they are placed in foster care.” In private, though, Mayfield reveals to White House Chief of Staff Russell Jackson (Željko Ivanek) that he is sore over being passed over for an appellate court seat by the Dalton Administration which he says is "contemptuous of American values" and “represents a soon-to-be disempowered minority clinging to power and bent on flushing this country down the sewer.”

Fortunately for Madam Secretary, the old, white, male partisan judge is replaced by the black, female Judge Pollard (Lisa Arrindell). She is decisively more lenient to the cause, but she too dismisses the case since the children do not suffer “irreparable harm” from the separation. This is, sadly, not where the story ends.

Desperate, Elizabeth turns to her political rival, resident right-wing jerk Senator Carlos Morejon (Josë Zúñiga) for help regarding his home state. Unsurprisingly, Senator Morejon is not willing to criticize his home state of Arizona over border positions he ultimately agrees with and turns down her request. Besides, he remarks, “from what I hear, these detention centers aren't all that bad. They say it's like summer camp for kids.” You can probably see where this is going.

To keep better favor with Mexico and bring the policy to light, Elizabeth offers to show Mexican Ambassador Rafael Lopez (Teddy Cañez) to the detention centers. There, the group is devastated to find the all-too-familiar and somewhat inaccurate image of kids being kept behind cages. Even worse is the callous treatment of these helpless children.

Elizabeth: Hey, excuse me? Are you gonna change that boy's diaper? I mean, I'm assuming he has one.

Elizabeth: Three hours. So you're just gonna leave him like that? 'Cause, I mean, where are his clothes? I'll change him myself.

Elizabeth: I don't care about procedure. Look at him.

It should be noted that these images of kids behind the chain-link fences with thermal blankets usually come from processing centers rather than detention facilities. Processing centers are only temporary locations where the children are taken momentarily as their parents are processed. Detention centers where children can be kept long-term can indeed look like a summer camp.

Against Barker’s orders and the state law, Elizabeth decries what she sees as “an affront to decency and an assault on our country's core values.” In the end, she is arrested for trespassing in a cliffhanger for the next episode.

Father Dinardo: Saint Francis said, "All the darkness in the world cannot extinguish the light of a single candle." If it took a visit from the Secretary of State to shine a light on the darkness inside this building, then praise the Lord for sending her. And God bless and protect those children, our little brothers and sisters in the Lord's kingdom.

Reporters: Why did you come to Arizona, Madam Secretary? What did you see in there? Are the children being mistreated? What kind of care do they have in there? What do you hope to prove?

Elizabeth: I came here to see for myself and to help Ambassador Lopez see what's going on behind these walls. What I saw is an affront to decency and an assault on our country's core values. Children separated from their parents, in cages, crying, terrified, lacking basic care. And the governor believes it's a deterrent. It'll keep others...

Stevie: Are you seeing this?

Elizabeth: But it is child abuse, plain and simple. No deterrent is worth trading our humanity.

Elizabeth: No policy, no matter its goal, is worth lowering our moral standing in the world.

Elizabeth: Nothing can justify harming children.

Barker: Ma'am, you are on state property.

Elizabeth: And the governor wants me to shut up. Yes. But I won't, because what he's doing is immoral and un-American, and every American needs to know about it.

Sheriff: Elizabeth McCord, you are under arrest for criminal trespass in the first degree in violation of section 13...

Elizabeth: Well... if desperate asylum-seekers aren't free from being detained unfairly in this state, why should I?

Wow, where do we start? First of all, the entire episode is predicated on a real-life policy that was enacted since 2014 through the Obama administration. It was not recently introduced by some bitter 2018 governor, and many issues in detention centers actually emerge from 2015 accounts. In fact, this attempt to attribute the child separation situation to a pseudo-Trump era only highlights how little the show has paid attention to illegal immigration overall.

Second, the episode constantly undermines every opposing figure as partisan and downright despicable. The judge who dismisses them is partisan. The senator who ignores the plight is ignorant. The governor responsible for it all is practically evil for caging children to get what he wants. How are any arguments for border security supposed to move forward if this is how liberals portray their opponents? And since when did advocates for strong borders translate into cartoon supervillains? Even that label might be too kind for this show.

Finally, the episode assumes that every group of adults and children traveling together are part of a family. Department of Homeland Security (DHS) Secretary Kristjen Nielsen revealed in a report that up to 10,000 children have crossed the border with people who aren’t their parents. Without intervention, hundreds of children could be left to the mercy of sex and drug traffickers. The only way to really assure that children caught crossing the border are with their real parents is through investigations that require the children to be separated from the adults. If Madam Secretary knows another way to accomplish this, it sure doesn’t care to show us. And don't forget that it is the parents' fault for anything that happens to their children as they drag them on a dangerous, illegal journey into America.

The whole thing is clearly a thinly-veiled effort to push politics regardless of facts. It’s no different than the recent attempts to politicize the death of a seven-year-old migrant girl. Both completely ignore details that undermine the narrative and are used for liberals to self-righteously rail at the administration for "child abuse." It’s a horrible way to end before Christmas but a perfect way to cap off 100 mostly left-leaning episodes. It truly is the apex of this awful political show.