What started as a rumor was confirmed by the Vatican mid-morning Wednesday: Kim Davis, the Kentucky County Clerk who went to jail for refusing to give same-sex marriage licenses, met with Pope Francis secretly last Thursday.

That news didn’t sit well with the liberal media -- who had staked a claim with the pope since he arrived on the scene more than two years ago. After he made comments about the environment and refrained from taking a hard-line stance on hot-button social issues, the left assumed the pope was on their side. Francis threw them all through the loop when the news broke that he did, in fact, meet with the left’s current enemy, Kim Davis. He allegedly even prayed for her. (Cue the raised pitchforks!)

A few expressed disappointment that they had lost their “hero,” like Tonight Show with Jimmy Fallon writer Mike Drucker and comedian Andy Richter (Conan).

Today's Pope news is... Well, it's like getting saved by Superman and then he excuses himself to sleep with your mom.

When you make ppl think you're cool for a while & then you do something Pope-y pic.twitter.com/O7ca2SNDMK

Journalists tweeted out snarky responses to express their displeasure: 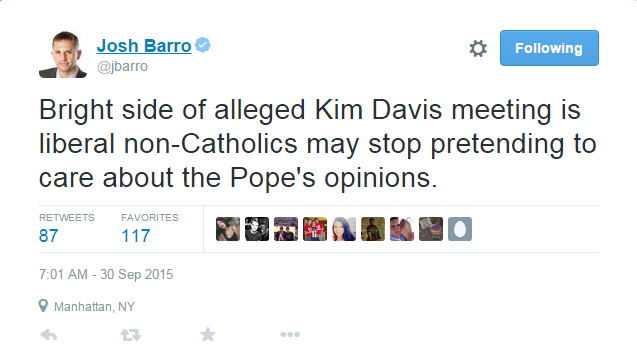 No matter what the Pope tells you, Kim Davis. pic.twitter.com/qpNmR6TExT

But like many Catholics and commentators have stated, the media are too quick to classify the pope as on their side politically.

Pope Francis refuses to be categorized. If he met with Kim Davis it is about conscientious objection and conscience being a moral rudder

Had the Pope met publicly with Kim Davis, media word thru all of last week would have been "divisive," How these scumbags roll.