Yes, the head of the Catholic Church is popular. And it’s because of that, that the liberal media smear his image to their own advantage.

The networks herald the “popular pope” where they agree with him, and censor him where they don’t (abortion, marriage). Media outlets from the Washington Post to MSNBC pit him against conservatives to create the illusion that he is one with them: a liberal. A liberal to the extent that he’s “very similar” to President Obama, as ABC insisted. 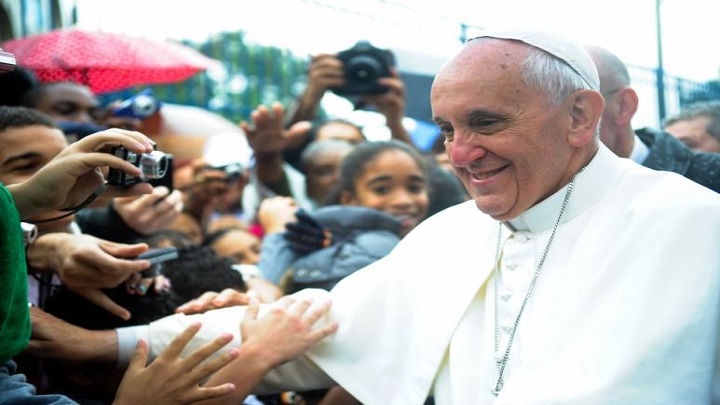 Here are the 5 Biggest Media Smears of Pope Francis:

1. The Pope Is Cool – Except When He Disagrees with Us

This summer, the network news shows from ABC and NBC latched onto every word of the “climate change” encyclical by the “popular pope” – every word, that is, except the ones regarding abortion and gender ideology.

While ABC and NBC emphasized the Church’s “moral call to action” on climate, they censored the encyclical’s repeated recognition of the human embryo as a human being and Pope Francis saying,“valuing one’s own body in its femininity or masculinity” is “necessary.”

But the broadcast networks aren’t the only ones at fault in the media.

On ABC’s The View, host Joy Behar whined, “No matter how compassionate he is, he still follows the rules of the church, anti-choice, anti-birth control, anti-divorce.”

When it came to gay marriage, the Daily Beast lamented over the pope’s “backpedaling on gays” while MSNBC.com despaired over “old school” Pope Francis’ views on marriage.

2. The Pope Is at War with Conservatives

While the pope sides with conservatives on culture issues, the liberal media like to pretend that conservatives disagree with Pope Francis – on everything.

Earlier this month, the Washington Post touted a “conservative rebellion” in the Catholic Church against the pope. Likewise, in the wake of the pope’s visit to Washington, D.C., NBC discussed how Catholics felt “tired” of social issues on top of predicting that the pope will make the GOP “uncomfortable.”

Washington Monthly blogger D.R. Tucker also foretold that when the pope addresses Congress, “right-wing Republicans” will put him “through a partisan hell.”

In line with that thinking, MSNBC’s Chris Matthews cheered on Pope Francis as a foil for more conservative Catholics, especially in the United States.

3. The Pope Is a Liberal

Because Pope Francis is at war with conservatives, he’s obviously – wait for it – a liberal.

New York Times religion reporter Laurie Goodstein exulted at the thought that Pope Francis will attack the United States’ “savage capitalism” while CBS heralded the pope as “one of the most progressive popes in modern times.”

But while the pope and the liberal media might agree at times, that’s not enough to excuse the pope from pitiful jokes.

The guiltiest of them all, comedian Bill Maher  poked fun at Pope Francis’ comments on baptism – calling it Catholic Church “bullsh*t.” Nothing's off limits for Maher, who once found occasion to joke, “The Pope has huge balls. You got to admit that. You would too if you were 78, and never had sex."

In 2014, Conan O’Brien joked about Pope Francis being a pedophile.

Despite their differences, the media assume – or want to assume – that President Obama and Pope Francis are basically the same person.

In anticipation of the pope’s meeting with President Obama in March, ABC's Robin Roberts called the two world leaders “very similar.” At the same time, the morning shows ironically refused to report that the pope's secretary of state "expressed [his] concern...for the healthcare reforms in relation to the guarantee of religious freedom and conscientious objection" while meeting with U.S. Secretary of State John Kerry.

The Washington Post saw “only positive” results and “huge potential” for the pope-POTUS meet.

After the March meeting, ABC again hyped a “bond” between the president and pope while all three networks downplayed the differences between the two.