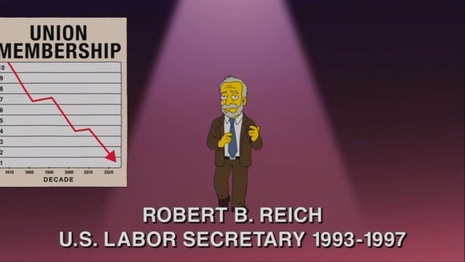 The history of post-war America’s economy is set to music in the season finale of The Simpsons. Airing on Fox on May 22, the episode titled “Poorhouse Rock” uses a musical production to explain the rise and fall of the middle class in America, courtesy of a cameo appearance by leftist Robert B. Reich.

Reich, who served in the Ford, Carter, and Clinton administrations, also served on former President Barack Obama’s economic transition advisory board. He’s a go-to guy for explaining liberal economic policies. He does just that in his cameo in this episode.

Bart Simpson decides he wants to be a part of the middle class like his father, Homer, after spending time with him on the job. After seeing how easy Homer’s job is and the paycheck Homer receives, Bart goes all in. Lisa tries to warn him that middle-class jobs are vanishing. Like Reich, she is a liberal who blames greedy corporate CEOs and the shrinking influence of unions, for the demise of the middle class.

Cue the musical production. Note that the voice of the custodian is that of Hugh Jackman:

♪♪ Time for me to join the middle class ♪♪

Homer: ♪♪ Well, I'm not smart, I'm not a go-getter ♪♪
♪♪ My drinking problem's not getting better ♪♪
♪♪ What job could I possibly do? ♪♪

Custodian, chorus: ♪♪ Your dad and his buddies had it swell ♪♪
♪♪ But gradually it all went to hell ♪♪
♪♪ Factories closed, unemployment would spike ♪♪
♪♪ Here to explain it is Robert B. Reich ♪♪

Reich:  The decline of unions, rampant corporate greed, Wall Street malfeasance, and the rise of shortsighted politics all contributed to increased economic inequality, widespread real unemployment, wage stagnation, and a lower standard of living for millions of Americans.

Reich: ♪♪ Cut up the pie and kept all the slices ♪♪

Custodian and Reich: ♪♪ And so it came to pass ♪♪

Bart's looking for an easy way to make money and says he’ll be an influencer and use his video skills. The nuclear plant’s custodian advises Bart to burn everything down and rebuild it to his satisfaction after Bart realizes he’ll never have a career as an influencer. Instead, Bart sets his treehouse on fire and has to be rescued by the fire department.

Naturally, in the end, when Bart sees himself as a firefighter, he’s encouraged to pursue the career by other firefighters because “the planet is on fire.” There’s always room for a climate change reference, right?

The musical production is an interesting way to present the liberal propaganda coming from Reich and his custodian friend. The history of America’s post-war economy isn’t seen in the same way as that of Reich by conservatives, but this is The Simpsons and lately, Lisa, the precocious liberal daughter, has been running the show.

Conservatives Fight Back! This episode was sponsored by Old Navy and Disney.  Let them know that re-writing history to score political points isn’t acceptable.