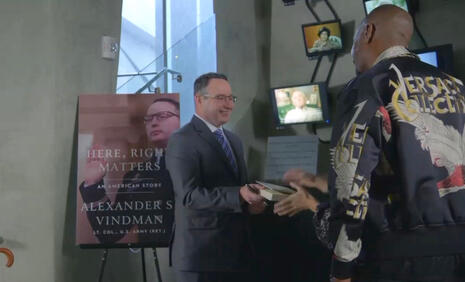 In the episode titled “The Mormon Advantage”, Larry David is asked by his friend Susie to host a party at his house for Vindman after his speech at the Holocaust Museum in Los Angeles. Larry agrees because he, too, is of the opinion that Vindman is a hero for coming forward.

Susie: Colonel Vindman, you know who he is.

Larry: How many people would've blown the whistle on Trump?

Susie: So, he's doing an event at the Holocaust Museum.

Susie: I was thinking, I wanna have a party for Vindman, introduce him to some celebrities, some Hollywood people, make him feel at home in Los Angeles.

Throughout, the episode makes veiled references to Vindman’s role in Trump’s impeachment. The most obvious is when Vindman overhears a phone conversation between Larry and a member of the city council. Larry offers to make a large donation to her church and then asks her for a favor. He wants her to vote against a city law that requires a five-foot fence around residential swimming pools.

He speaks like Trump with phrases like “bad hombres” and “a perfect call”. Vindman hears the quid pro quo and tells Larry he will have a transcript made of the phone call (like that of Trump’s to the new Ukrainian president) and give it to the city council president.

Larry: Just a simple Mormon misunderstanding. And again, I really want to apologize.

Councilwoman:  Well, thank you, Larry. I do appreciate your apology.

Councilwoman:  A large donation like that could make a difference in so many lives.

Larry:  I'm also wondering if it's possible you could do me a little favor.

Larry: Yeah, I would love to have your vote to get rid of five-foot fence law. It would be great to have a repeal, a big, beautiful repeal. You know, a lot of people have been talking about that law, telling me what a disgrace it is. Some very bad people were involved-some very bad hombres.

Councilwoman: Really? I-- I had no idea. What about Councilmember Yovanovitch? I heard she's voting against it.

Larry:  Yovanovitch, she's no angel. She's gonna go through some things, believe me.

Councilwoman: Oh, my. Uh, and what about Head Councilmember Weinblatt?

Larry: There's a lot of talk about Weinblatt's son. His father got him a job at that construction company. You know what they make?

Larry: Yeah, fences. It's a disgrace, and people are saying it needs to get looked into.

Councilwoman: I didn't know any of this was going on behind the scenes.

Larry:  Oh, yeah. That's why your vote is so important to me.

Councilwoman: Well, I mean, I did initially feel this way anyway.

Larry:  Yeah, the donation that I was telling you about, we could transfer that tonight. So do we have a deal?

Councilwoman: You can count on me.

Councilwoman: Thank you, Larry. I'm so glad you called.

Larry: Me too. Okay. Bye! You're using the upstairs bathroom?

Vindman: Yeah, the one downstairs is occupied.

Larry: Yeah, you know, the master bathroom, it's-- it's like the bathroom at the officer's club. It's kind of off limits.

Vindman: I heard the call, Larry.

Vindman: I'm concerned by the call.

Larry: It was a perfect call.

Vindman: That call was far from perfect.

Larry: No, no, it was perfect! Perfect call!

Vindman: What you did on that call was completely improper.

Vindman: Let me ask you a question. Where'd you get those shoes?

Vindman:  I'm sure you could do better than that, Larry.

Larry: Okay, my father gave them to me. What are you gonna do?

Vindman: I'm going to transcribe that call. And I'm sending it to the head of Santa Monica City Council.

Larry: Why-- why would you do that?

Vindman:  It's the right thing to do to report it. It's my duty.

Larry:  Your duty? Your duty? Come on, enough with your duty! There's too much duty. You're off duty!

Vindman: You steal shoes from the Holocaust Museum.

Larry:  It was raining.

Vindman: You rope off chairs.

Larry: It's my chair.

Vindman: And you bribe councilwomen.

Vindman: And I'm sure Head Councilman Weinblatt will be very interested in hearing about all this.

Larry:  What? Vindman! Vindman! What are you-- What are you doing, Vindman? No, don't do it! Come on, Vindman. Come on, give me a break! You don't understand what's at stake here. Whatever I did, it wasn't half as bad as your using the upstairs master bathroom! That's the real crime! It was a perfect call! A perfect call!

It’s good that this is the season finale. If the best the show can do is try and bring back the first Trump impeachment story, it’s time to end the season.