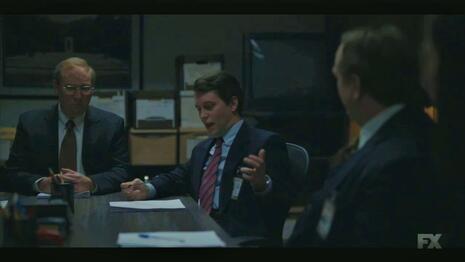 The 1990s are back and the ugly Clinton scandals are woven into FX’s Impeachment: American Crime Story, with the main focus of the mini-series being President Bill Clinton’s sexual exploitation of Monica Lewinsky. With many key players in today's political landscape being involved in the saga, Ryan Murphy's series appeared to work in a hit against Supreme Court Justice Brett Kavanaugh.

In the episode which aired on October 5 titled “Do You Hear What I Hear?”, it is Christmastime in 1997 and Judge Kenneth Starr (Dan Bakkedahl), who was the independent counsel in charge of investigating the Clintons, is shown meeting with his legal team to determine if they have enough evidence to recommend impeachment.

The consensus seems to be no, with Jackie Bennett (Darren Goldstein) fighting to keep the case open and asking future Supreme Court Justice Brett Kavanaugh, a young lawyer on Starr’s team, if he agrees. Perhaps as a nod to liberal obsessions with sexual assault allegations at Kavanaugh’s Supreme Court confirmation hearings, the script has Kavanaugh (Alan Starzinski) saying, “I never like to take 'no' for an answer...” It was an odd turn of phrase that stuck out like a sore thumb.

Jackie: We're failures if we quit. What am I-- the only one who sees this? Huh? Come on. Kavanaugh, huh? You don't think we should just quit?

Brett Kavanaugh: I never like to take "No" for an answer, but, Jackie, there isn't a path forward here.

Were the writers hoping the audience thought of the smear campaign against Kavanaugh and the attempt made by liberals to paint him as a serial rapist by using that line? The AV Club picked up what they were putting down in "Stray Observations."

The series’ showrunner, Sarah Burgess, confirmed that it was indeed Brett Kavanaugh — the same man now sitting on the Supreme Court. The “never want to take no for an answer” line is a grim reference to the accusation by Christine Blasey Ford that Kavanaugh sexually assaulted her when they were teenagers in 1982. He vehemently denied the accusation during his Supreme Court confirmation hearings.

That is a lame attempt to keep the false narrative alive that Kavanaugh is a sexual predator. The unproven allegations against Kavanaugh during his confirmation hearings paled in comparison to those that were proven against Bill Clinton.

But the Hollywood hatred of the Supreme Court Justice still runs hot. On Twitter, an account claiming to be Starzinski (seemingly confirmed by Now This's Sean Morrow), the actor who portrayed Justice Kavanaugh, tweeted during the show, "Brett, if you are reading this, go fuck yourself."

Sorry, Starzinski, Justice Kavanaugh has far more important things to be doing than reading your tweets, what with a lifetime appointment to the Supreme Court and all.