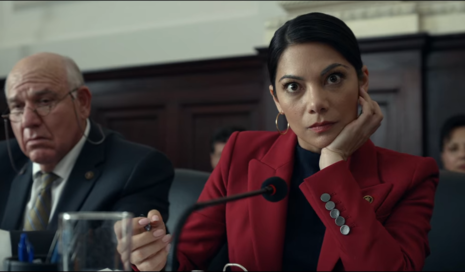 Netflix is airing Space Force, a parody of the United States Space Force, the space warfare service branch of the U.S. Armed Forces established by President Trump. The ten episodes began streaming on May 29.

The series is not being very well-received because there is little to make it a worthwhile binge, despite a good cast. Liberals are particularly irritated that what could have been an anti-Trump series instead steered clear of partisan politics. Most of all, the series lacks real comedy.

Actor Steve Carell plays four-star General Mark R. Naird, the first Chief of Space Operations. Three members of the House Armed Services Committee (including a character based on Rep. Alexandria Ocasio-Cortez) visit the base in Colorado to witness the launch of Epsilon 6, a satellite, while the United States is in a space race against China.

Rep. Ocasio-Cortez was parodied by the actress Ginger Gonzaga, who was thrilled to let the real congresswoman know about it. Her character’s name is Anabela Ysidro-Campos. AYC instead of AOC, you see.

In the third episode, titled “Mark and Mallory Go to Washington”, General Naird and his top civilian adviser Dr. Mallory (John Malkovich) travel to Washington to answer questions from the budgetary committee. The old white conservative committee chairman is portrayed as a flat-earther while two liberal congresswomen, including AYC, are shown as inquisitive and asking for budget cuts to the Space Force operations. This falls in line with a tweet from AOC about the real Space Force. She clearly doesn’t think the space program is a good priority.

In the show, AYC questions the logic behind spending $10,000 to send a variety of fresh, non-dehydrated foods, including an orange, into space with the astronauts. She zeroes in on the orange, holding one up as a visual aid when questioning General Naird. He explains it is NASA policy to allow each astronaut one pound of the food of their choice during each re-supply. “I want to be able to tell my constituents on food stamps why your astronaut needs a $10,000 orange,” she replies as she asks him to justify the expense.

General Naird then delivers a detailed answer about putting people over money. A fresh orange is a piece of home to an astronaut who is doing a dangerous job for the benefit of millions of people, eating dehydrated mac and cheese for months mixed with her filtered urine. “I want her to have a little taste of the earth to remind her what she is fighting for.” Let’s just say the general won over the room with that response.

During General Naird’s answer, as he is telling the committee that the orange is a good example of earth’s beauty, some leftist women in Handmaid’s Tale capes and bonnets interrupt the hearing chanting, “You don’t get to drive my vulva.” They are told the Supreme Court hearing is on Wednesday. Oh, brother.

It is Dr. Mallory who puts AYC in her place, explaining why the Space Force is necessary and how it will save lives and money.

The series had potential for humor but it continually missed the mark. Fortunately, there were not any strident anti-Trump references as so many Netflix shows revolve around. His name was never directly mentioned besides a reference to POTUS. Thank goodness for same favors. If there is a second season, let’s hope there are more chuckles and less groans and eyerolls.