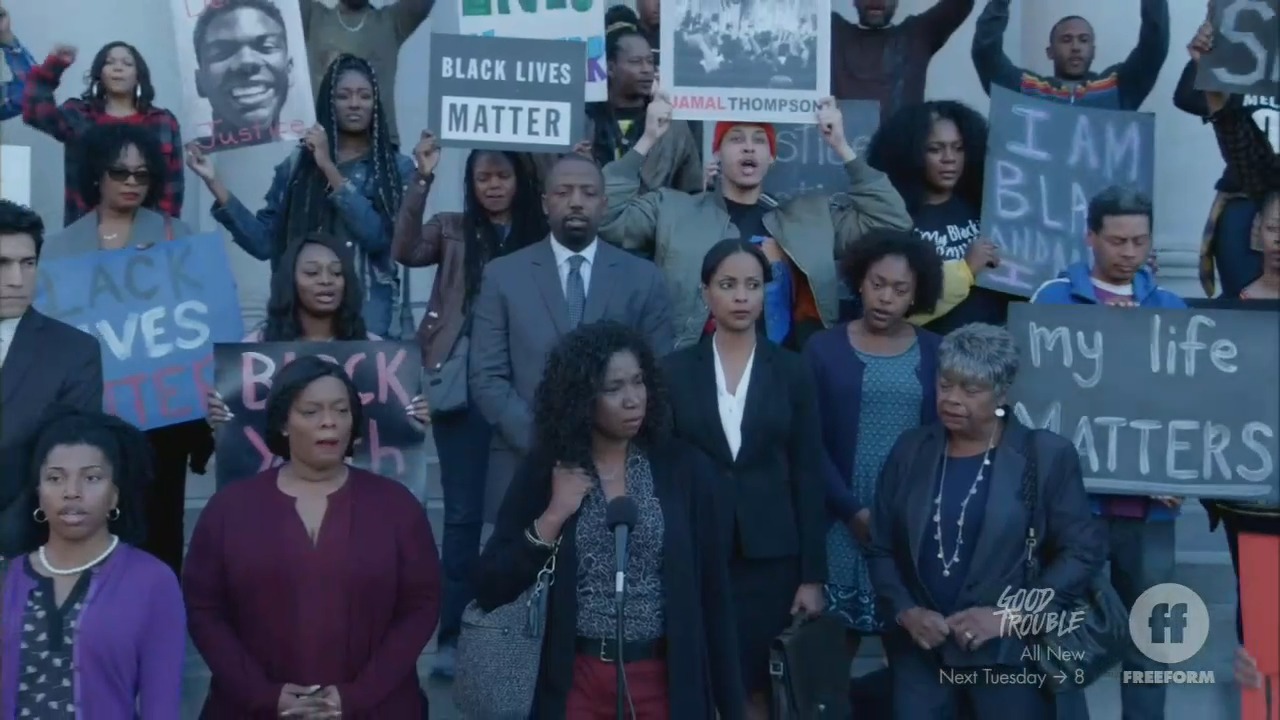 There is no doubt that Freeform’s The Fosters spin-off Good Trouble is woke. From gay relationships and pay inequity to the death of a young black man at the hands of a white policeman, Tuesday night's premiere checked all the boxes and announced Season Two is chock-full of wokeness.

The episode, titled “Percussions,” shows the verdict in the Jamal Thompson trial. Jamal was killed by a white cop as he was running away from him. The Black Lives Matter crowd monitors the trial throughout the ordeal and rallies after the verdict is delivered from the jury. The jury finds the officer not liable in Jamal’s death from excessive force and not liable in the failure to provide critical care after he was shot.

Jamal’s mother, Sandra, speaks to the crowd after the verdict. Callie Adams Foster (Maia Mitchell), a clerk in the presiding judge’s office, joins her friend Malika Williams (Zuri Adele) on the courthouse steps during Sandra’s speech railing against the American justice system in which she invokes the names of Geneva Reed-Veal (mother of Sandra Bland), Gwen Carr (mother of Eric Garner), and Lesley McSpadden (mother of Michael Brown.)

Sandra: I am tired of white juries and white judges protecting these officers who kill us. Who shoot us and beat us to death, without fear of consequences. A Supreme Court who uses racism as its justification. If they fear us, if they hate us, then it's okay to kill us.

Sandra: I am not the only mother whose child has been stolen by law enforcement. I stand here today with Geneva Reed-Veal, Gwen Carr, Lesley McSpadden, and all the other grieving mothers fighting for answers and accountability where there is none... Well, they might as well have shot me today. I wish they would have. I wish they would have put me out of this pain and this misery. Officer Lawrence Griffin and Officer Amir Turani murdered my baby. I will never hold him again. I will never laugh at his silly jokes again... I will never hear him say, "I love you, Mama," ever again.

This show targets an audience of teenagers and twenty-somethings. Social justice trumps everything else. Unfortunately, racism is easily blamed for just about everything. In this case, the sweeping generalization that all white cops are bad and just want to kill black men is so destructive and just wrong. By including white judges and the Supreme Court in her anger, a grieving mother becomes a part of the divisiveness.

In other news, Mariana Adams Foster (Cierra Ramirez) begins an affair with her co-worker Raj Patil (Dhruv Uday Singh). Raj, as it turns out, is uncircumcised and for some reason, the viewer is treated to that random information. We also learn that Mariana is in new territory here and gets advice from her friends on sex with an uncircumcised man.

Later, Alice Kwan (Sherry Cola) lets the world know that she is gay. Her conservative Asian parents accept this and even ask what took her so long to acknowledge it. They are woke, too, you see but in an old-school way. They tell Alice that though they are cool with her disclosure, she must not let the whole family know. Also included in Alice’s storyline is the fact that her girlfriend Joey (Daisy Egan) wants to change her pronouns to they/them. Because, of course.

Can't wait to see what woke virtue signaling the next episode brings.