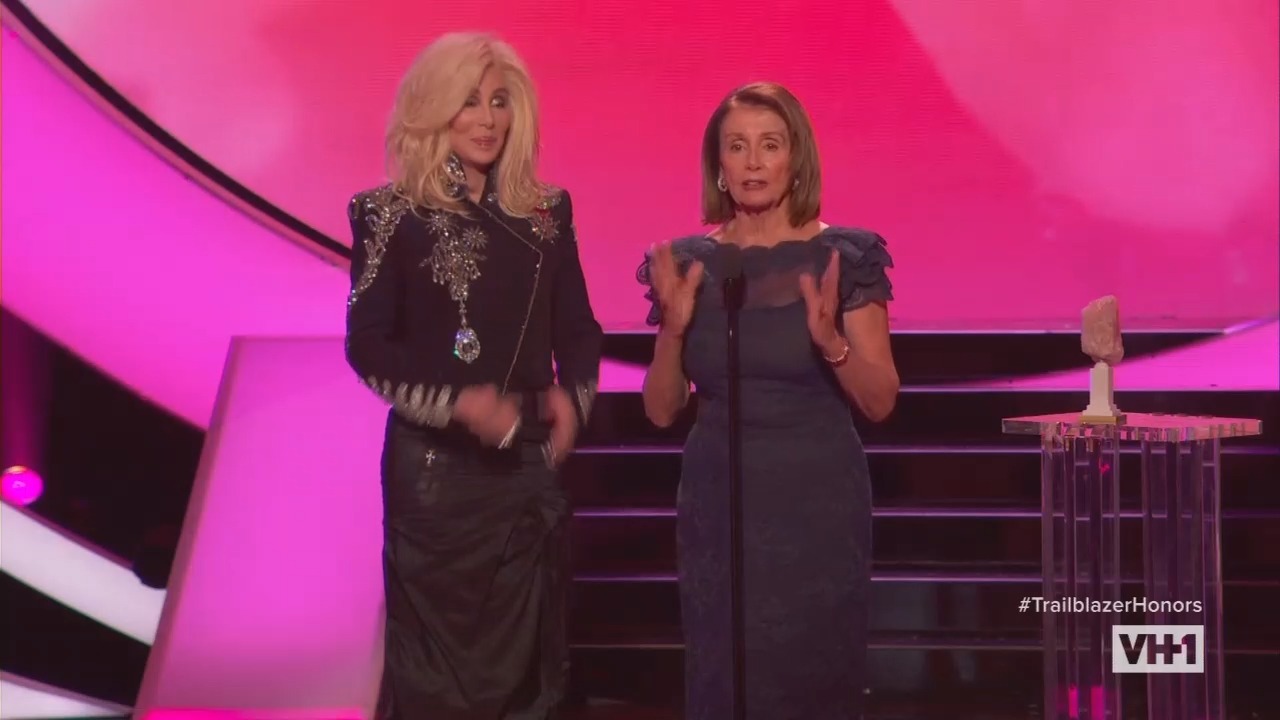 You’d think that an entertainment cable channel would air their award show live but that didn’t happen with the VH1 Trailblazer Awards. The award ceremony took place on February 21 but the show didn’t air on the network until March 8 to coincide with International Women’s Day.

The 2019 recipients were Speaker Nancy Pelosi, Ava DuVernay, Tarana Burke, and Margaret Atwood. Atwood was not present to accept her award. The author of The Handmaid’s Tale is working on a sequel to her original book so soon American liberal women will be able to read part two of how America is filled with Stepford Wives living under the thumbs of men. Fortunately, Atwood admits that her book can’t really come true in today’s America, so that’s a step in the right direction.

The real crowd-pleaser of the four honorees was Speaker Pelosi. Cher introduced her and brought politics and President Trump’s name into the evening. Ick. I suppose it was too much to hope that Pelosi could just be honored without dragging on the president to do so. After bashing the founding fathers as old white men, Cher referenced her anger as she sees President Trump’s “gazillion lies” and as he “spews his hatred.” Then she comforts herself with the fact that “Nancy’s in the House.”

Cher: I’m a terrible speaker and I’ve re-written this a million times, but I wanted to be here tonight to celebrate with my hero. We hear the word "Icon" used a lot these days describing people like me, but as far as I'm concerned, a true icon is the woman being honored here tonight. Since the day our founding fathers signed the Declaration of Independence, our country has been run almost exclusively by old white men. Thankfully, because of Nancy and other strong women, this is changing. Nancy's a fighter. She won't back down, she muscled through the Affordable Health Care Act and she isn't afraid to go toe-to-toe with a bully and beat him in his own game. When I see Trump spew his hatred and tell his gazillion lies, I get pissed off, but I also feel really uneasy. Then I see Nancy come on TV and I think, "It's all good, Nancy's in the House." Nancy has dedicated her career to being a fierce advocate for the underdog, for women, for the LGBTQ community and for the poor. She's the highest-ranking woman ever in American Politics and because of her and other strong women like her, soon there'll be a woman president. She gives me hope and courage, she is elegant and formidable, and when I grow up, I wanna be just like her. Madam Speaker, Nancy Pelosi.

To thunderous applause and a standing ovation, Speaker Pelosi walked to the stage. She gushed over Cher and called her “the goddess of rock.” She rambled on about the usual Democrat talking points, touting the election of 100 women in the new Congress. She got in the Democratic House’s fight for equal pay and to “defend a woman’s right to choose every single day.” She ended her speech by saying she’ll display her award in the Capitol. Her speech was only noteworthy because of its generic composition which truly only amounted to rote talking points that one of her interns could have written for her.

Also on hand: "attorney, professor and pioneer" Anita Hill recognized everyday trailblazers ... like "the first ever openly trans woman to be cast" on the show RuPaul's Drag Race. Wow.

The show mercifully lasted only one hour. Other than Cher’s sentences aimed at President Trump, she also included how Pelosi “muscled through” Obamacare. She unwittingly likes to encourage authoritarianism in leaders on the left, apparently. I don’t consider that an admirable quality but maybe that’s just me.