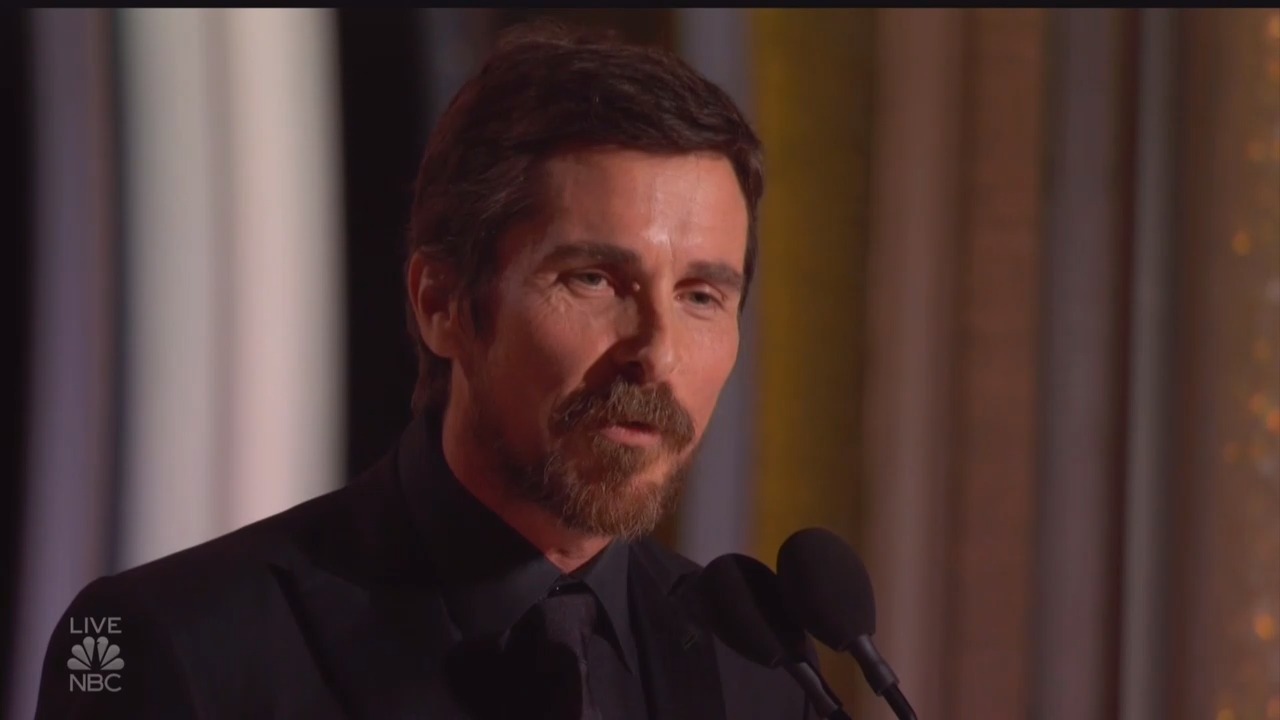 Hollywood is welcoming the new year with the start of the awards season. The 76th Annual Golden Globe Awards aired January 6 on NBC. Though the show was mostly tame in political rhetoric from the award winners, presenters, and hosts, that streak was broken when Christian Bale won the Best Actor Award for his role as former Vice President Dick Cheney in the movie Vice. Along with thanking Satan for inspiration, he also mused about playing Senator Mitch McConnell as the next in a series of "charisma-free assholes."

Bale: Thank you to that geeser, Adam. He said I’ve got to find somebody who can be absolutely charisma-free and reviled by everybody, so he went, oh, it’s gotta be Bale in it. Thank you. And for all the competition I will be cornering the market on charisma-free [assholes]. What do you think, Mitch McConnell next, that could be good, couldn't it? Thank you to Satan for giving me inspiration on how to play this role.

So, the Englishman who played an American vice president used the opportunity of winning an award to claim that Satan gave him the inspiration to play the role and called two of our political leaders "charisma-free assholes." Classy.

Earlier, the president of the Hollywood Foreign Press, Meher Tatna, announced million dollar grants to two liberal pet projects under the guise that they are “two nonprofit, nonpartisan organizations.” The two organizations are The Reporters Committee for Freedom of the Press and InsideClimate News. The Reporters Committee for Freedom of the Press recently went after Trump's rhetoric saying it gives dictators license to oppress reporters and Tatna justifies the grant to Inside Climate News because global warming is "the defining global issue of our time."

Announcer: Welcome back to the Glden Gobes. And now the president of the Hollywood foreign press association, Meher Tatna.
Meher Tatna: Good evening. I am proud to represent the Hollywood foreign press as celebrate the authors whose work is entertained, informed, inspired and uplifted us. The freedom of expression that makes possible your work as creators and our work as journalists is under siege which is why our mission to establish cultural ties between foreign countries and the United States has never been more important. To that end, [applause] to that end our members representing 50 countries have unanimously voted to expand our mandate to support journalists around the globe, with grants of $1 million each, to two nonprofit, nonpartisan organizations. The Reporters -- The Reporters Committee for Freedom of the Press which provides pro bono legal representation for journalists. And Inside Climate News, which covers the defining global issue of our time. Simply put, it is incumbent on all of us to protect and preserve the freedom of creative expression of speech and of the press. This is our story to tell. This is our story to write.

So, the awards season is off on and running. Hopefully political snark will be kept to a minimum but we can see that the standard pet projects will continue to be mentioned. We are living in Trump’s America, you know.

Toward the end of the awards ceremony, The Assassination of Gianni Versace: American Crime Story won for Best Limited Series or Motion Picture. Executive Producer Brad Simpson launched into some standard rhetoric about the left’s obsession with “the forces of hate” that are "still with us." #TheResistance is alive and well in Hollywood, after all.

Simpson: Thanks to our brilliant Fox, thanks to FX for supporting this. And also Joe Cohen. Thanks to our partners at home. My family, Joslyn, Oliver, baby Lark.

Gianni Versace was murdered 20 years ago. One of the public figures out in "the don't ask, don't tell," Defense of Marriage Act era. Those forces of hate are still with us. They tell us we should be scared of people different from us. They tell us we should put walls around ourselves. By artists would we must fight back by representing those not represented and by providing a space for people for new voices to tell stories that haven't been told. As human beings, we should resist in the streets. Resist at the ballot box. And practice love and empathy in our everyday lives. Our show is a period  piece but those forces are not historical. They are here. They are with us and we must resist. Thank you.

Something tells me the American people are going to resist watching these awards shows and we'll see it in the ratings.