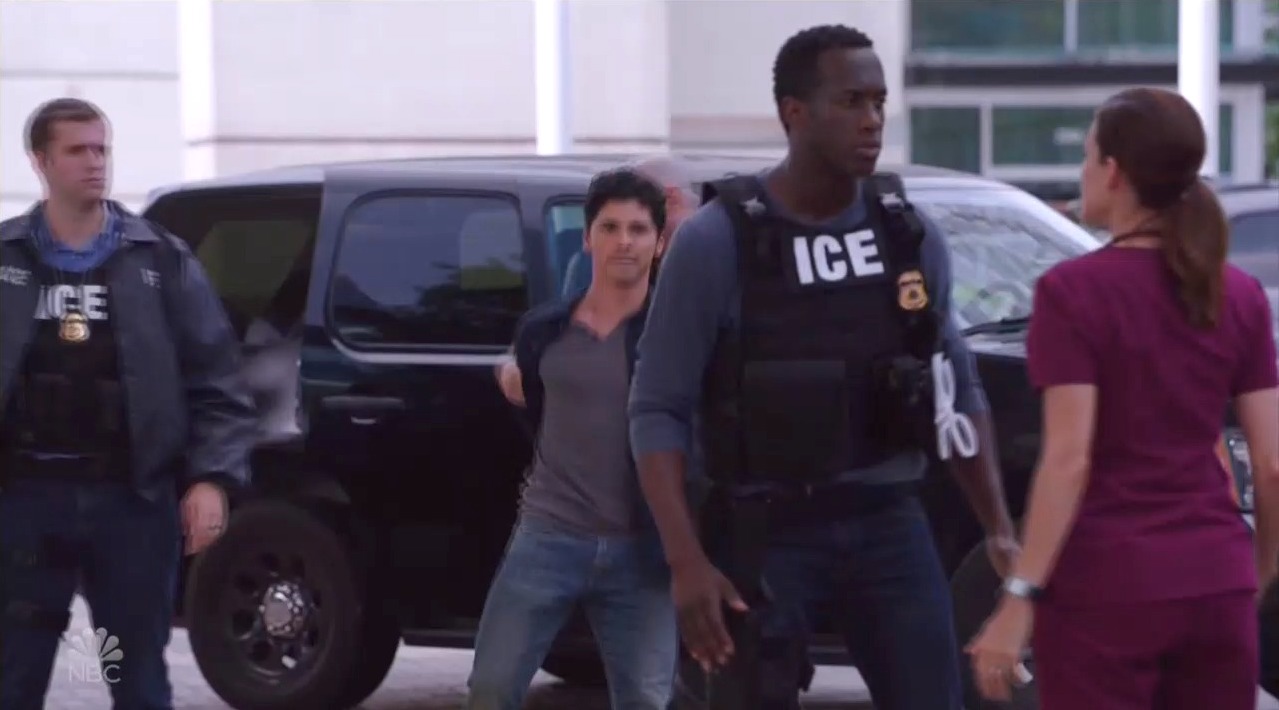 The three Chicago shows on NBC that now run back-to-back on Wednesday nights usually don’t get political in dialogue. Sometimes, though, as with so many shows these days, a storyline here and there creeps in and a slap is delivered to the current administration. In the October 17 episode of Chicago Med, the subject was immigration policy and, of course, deportation and the separation of families in "these uncertain times."

In the episode titled “Backed Against the Wall,” a female patient finds out she has leukemia. The good news? A stem cell transplant can cure her. The bad news? She will likely be denied by the transplant network because she's not a U.S. citizen and doesn't have insurance.

Linda Harper is married to an American citizen, which allows her to apply for a green card, but until she has official legal status, she's not covered by her husband's Medicaid. The transplant network requires proof of "stable insurance to cover the procedure and the follow-up cost." The only other option is to pay out of pocket to do a direct donation from her brother.

Linda's husband decides they'll go the private donation route regardless of cost but her brother, Manny Calderon, declines to be her donor. He finally comes clean to Dr. Natalie Manning (Torrey DeVitto) and hospital administration Sharon Goodwin (S. Epatha Merkerson) about why. He is an illegal alien and too scared to donate for fear of his name being put into a database that the federal authorities will monitor. Dr. Manning bemoans “these uncertain times” but says they will do all they can to shield him from ICE.

Ms. Goodwin: Your sister needs you, Mr. Calderon. Please, help us understand your decision.
Manny: Donating stem cells means my name goes into your system. They monitor them. That's how they get you.
Goodwin: Ah. You're undocumented as well, aren't you?
Manny: Yes. And so is my wife. She's pregnant. I love my sister. I risked our lives to get us here from El Salvador, but... if I get deported...
Dr. Manning: The hospital is prohibited from sharing personal data to law enforcement. That includes immigration officials. No one will know you're here.
Manny: Government will find out. They'll come for me and then for my wife.
Manning: Mr. Calderon, I realize that these are uncertain times for immigrants but you'd be donating stem cells to your sister. You'd be saving her life.
Manny: They won't care. You don't understand. How could you? But it's real. They take people from work, from home. They separate families. I might never see my wife again. Meet our child. I'm sorry. No.

So he's willing to let his sister die because he's afraid of being deported. Nice.

But eventually Manny has a change of heart. Proceeding ahead, Manny receives the first infusion he’ll need to boost his stem cells. As he leaves the hospital with Dr. Manning he says he’s scared and she apologizes for our country’s immigration laws and the current enforcement of them.Then, as he turns to go to his car, ICE agents come screeching into the parking lot and take Manny into custody. Dr. Manning screams at the agents and tells them Manny is saving a life, they have to let him go. Needless to say, they don’t.

Dr. Manning: It’ll take five infusions to boost your stem cells to donation level. So come back tomorrow and I'll meet you at the outpatient clinic for number two.
Manny: I know helping Linda is the right thing to do, but... I'm scared.
Dr. Manning: Manny... What's going on right now in this country--I'm sorry. I hope it's not always like this. See you tomorrow.
ICE agent: Stop!
Dr Manning: Hey!
ICE agent: Stop right there. Immigration and Customs Enforcement. You're under arrest.
Dr. Manning: Hey, what are you doing? No, no, no, you need to stop. This man is donating stem cells.
ICE agent: Ma'am, please step back.
Dr. Manning: I need you to stop. He is saving a life. Get your hands off of me!

So, while the hospital obeyed federal law and they found a way for a non-citizen to get treatment for a life-threatening condition, a doctor voices regret that our country enforces immigration law. It’s really quite frustrating to hear this nonsense. Sovereign nations enforce laws. American administrations are entitled to send those trying to jump the line and cross into the country illegally back to their own country. Legal immigration is a privilege, not a right. The apology tour of the last administration is over. It’s time to move on.

Speaking of the last administration, how come Hollywood didn't have all these anti-ICE plots when Obama was doing deportation raids and separating families at the border? Now under Trump, ICE agents always seem to pop up at the worst possible moments for maximum dramatic impact on our shows, like at funerals or high school proms, just to prove how heartless and evil they are.