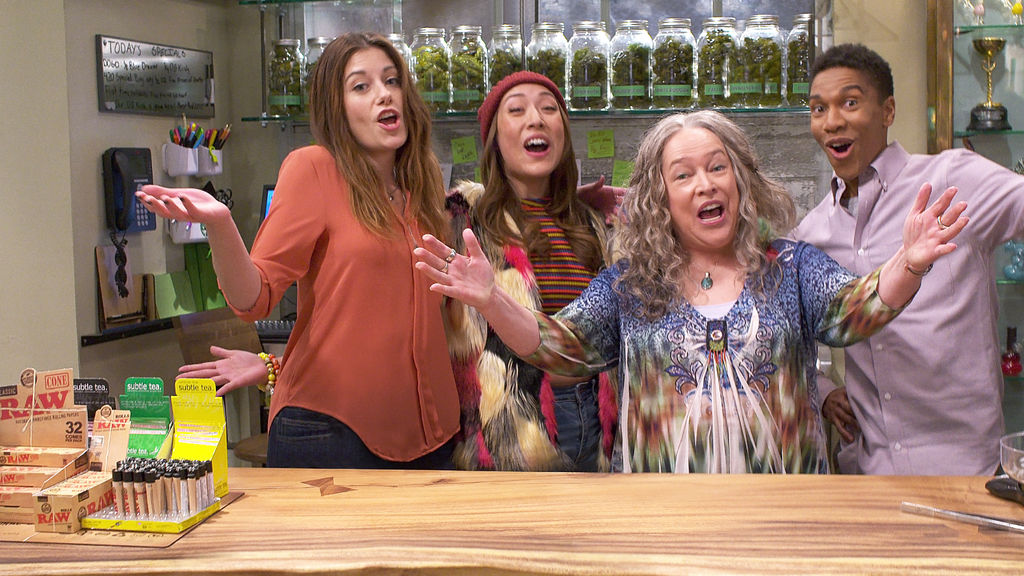 Season Two of Netflix’s Kathy Bates comedy Disjointed was released on January 12 with 10 half-hour episodes. The series is clearly liberal in its writing and dialogue but most episodes are done in a light-hearted way. Except for an obligatory swipe at the California left’s favorite villains, the Reagans.

Kathy Bates plays Ruth Whitefeather Feldman, the owner of a medical marijuana dispensary in Southern California. The series centers around her, her son, and the people who work and patronize the business.

In Episode 3, titled “Buds Lite,” Steven “Dank” Dankerson (Chris Redd) and his girlfriend Dabby Shapiro (Betsy Sodaro), the dispensary’s very best customers, are arrested for smoking weed in a National Forest. Smoking next to the park ranger’s station was not the best move to make. The act did, though, bring in an opportunity to battle the conflict between federal and state law on the legality of marijuana use.

Ruth, a lawyer, bails the two out of jail and lectures them for being so stupid. Then she gets a laugh out of reminiscing about smoking pot at Nancy Reagan's funeral.

Ruth: You morons have really stepped in it this time. I mean, I’ve smoked weed everywhere in the world you're not supposed to – the Reagan Library, the Reagan White House, Nancy Reagan’s funeral. But even I never thought of smoking weed in a national forest 20 feet from a ranger's station.

Yeah, that’s some real Hollywood elitist hatred for the Reagans right there.

Bashing Nancy's anti-drug initiative seems especially popular these days. It was only one week ago that Nancy Reagan was mocked as "ineffectually trying to warn young people about drugs" on FOX's Family Guy, and last year characters on Netflix's GLOW were shown snorting coke off a photo of the Reagans at a fundraiser for Nancy Reagan’s “Just Say No” campaign.

Hollywood leftists still don’t get it. Half of the country is turned off by random, unnecessary partisan nonsense inserted into entertainment dialogue. Disjointed is a quick binge of a series that fights a laugh track and less than stellar acting by the characters, with Bates being the one exception. Why lose more viewers over petty, disrespectful political references?

The series continued to promote a pro-cannabis agenda, with a heavy emphasis on the medicinal benefits of the drug. No doubt Bates's own personal history as a cancer survivor of both ovarian and breast cancer is a source of inspiration for her to draw upon.

This included an unexpected element – a Public Service Announcement (PSA) by former NFL players demanding NFL Commissioner Roger Goodell allow active players to use marijuana. To be honest, I had no idea such a movement was underway, all we ever hear about is National Anthem protests.

The PSA is in Episode 6, titled “B.Y.O.P.F.U.”, by the Gridiron Cannabis Foundation, described as a non-profit foundation that "focuses on advancing the research of medical cannabis in order to allow players an alternative means to treat injuries such as concussions and chronic pain." The players speaking in this PSA are Ricky Williams, Eben Britton, Mark Restelli, Boo Williams, Jim McMahon, Chris Kluwe, and Kyle Turley.

They begin by saying, “The men who play American football are subject to a life of injury, pain, and disease, both during and after their careers.” Their reasoning is that cannabis alleviates pain and “is an alternative to addictive narcotic painkillers with serious side effects.” The PSA ends claiming medicinal marijuana should be allowed without the stigma of a banned substance. “So, let’s get real, Roger,” they say. “Cannabis isn’t a drug, it’s a medicine.”