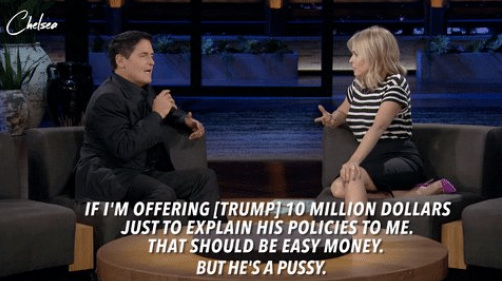 The episode titled “Would You Buy Your Dad a Hooker?” of Netflix’s Chelsea turned into a tag team effort between billionaire owner of the Dallas Mavericks Mark Cuban and CNN’s Chief Political Correspondent Dana Bash promoting the candidacy of Hillary Clinton for President and dissing Donald Trump.

Cuban had previously voiced support for Trump. And the reason that Cuban has suddenly turned on him? It is simply because Trump is now the Republican nominee. Cuban knew he would be a Hillary supporter as soon as the primaries were over. He didn’t want Texas Senator Ted Cruz to be the nominee – “He’s scary, because he’s smart, you know” – so he encouraged Trump during the Republican primary as he said publicly that he liked both Hillary and Trump. Two-faced, much?

Recently, Cuban proposed a four-hour interview with Trump and to sweeten the challenge Cuban promised $10M paid to Trump or a charity of Trump’s choice. Cuban claims it is to explore Trump’s policy ideas. Since Trump has ignored his former pal’s offer, Cuban calls Trump “a pussy.” Cuban said the two men used to frequently speak on the telephone and he often sent Trump links to policy articles, books, etc. in order to encourage Trump to learn about political policy, but he wasn’t interested in learning.

Dana Bash was brought on to opine about the election cycle and naturally she fit right in with Cuban and Chelsea Handler on the subject of Hillary Clinton. Bash bemoaned the fact that Hillary doesn’t really answer questions posed by the press and said, “It takes grit to keep going at her.” Um, isn’t that supposed to be the job of a journalist – to pursue answers? Cuban chimed in that Hillary Clinton “is boring” but Trump “is dangerous.” Another comparison was Hillary is “guarded” but Trump “doesn’t know the answers” to questions on policy.

Dana Bash said that the biggest challenge today for a journalist is to “be objective. Being objective just means going for the truth.” Then she spouted the mandatory talking point from her bosses at CNN – Trump lied when he accused Clinton’s 2008 campaign of introducing the birther issue to that campaign cycle, which he then took and ran with in 2012.

Handler asked about the possibility of a voter choosing to vote for Libertarian candidate Gary Johnson. No, no. That’s just throwing a vote away, Cuban declared.

The show ends with an interview with Amy Schumer. Ugh. Did the viewers really need to hear that Schumer would be happy to pay for a hooker to service her dad? Yup, that's the show that "journalist" Dana Bash and Mark Cuban just wasted their time on.