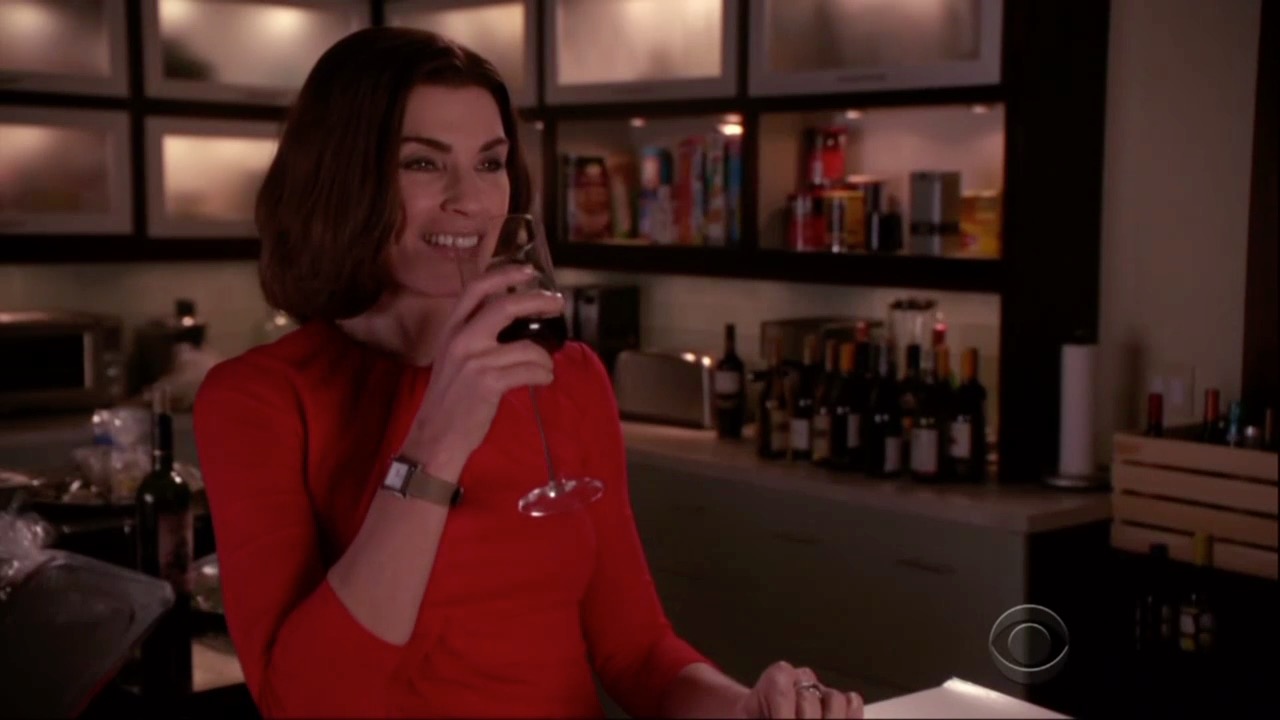 Alicia (Juliana Margulies) throws a party for Peter’s mother and her fiancé in “Party,” CBS’s The Good Wife’s latest episode. From the wrong flowers arriving – funeral arrangements instead of the ones she ordered – to a cake personalized with “Rest in Peace,” Alicia can’t catch a break. Even the joyous return of son Zach (Graham Phillips) turns bad.

Zach, now living away at college, returns for his grandmother’s celebration with new girlfriend, Hannah (Taylor Rose). Along the way, their engagement is announced. Surprise! For good measure, Hannah is older. She’s a 23-year-old senior about to graduate and take a job in Paris. Every mother’s dream for her son in his first year of college. Not.

In true suck-up mode, Hannah lets Alicia know that she thinks it’s great that Alicia stayed married to Peter through the difficulties faced by the couple. Why, it’s the new feminism! Women should just do what they want and consequences be damned. The best part? The irony of Hannah’s inclusion of Huma Abedin’s name is a reference of the new feminism of keeping a marriage together – standing by her man. The irony is lost on young liberal Hannah that Abedin, married to the disgraced former Congressman Anthony Weiner, works for Hillary Clinton. Clinton once remarked with a straight face that she was no Tammy Wynette “Stand By Your Man” kind of woman when her husband was running for president.

Hannah: You're Grace, right? I'm Hannah McCreary. Is your brother... ?
(Laughs)
Zach: Mom, I want you to meet my girlfriend, Hannah.

Hannah: I'm so glad to meet you. I loved that you stood by your husband. A lot of people my age think it's a throwback to an old kind of domesticity, but I think it's a harbinger of a new feminism. Like Huma Abedin, you know? Women should do what they want, even if what they want is to stand by their man.

Zach:  Hannah's a proctor in my dorm.

Hannah: I know I'm older, but Zach is older in maturity than he looks. And sometimes compatibility is more a function of intellectual reach than physical years, don't you think?

After Alicia and Peter try to convince Zach that being a househusband to Hannah in Paris might not be the best decision he could make to no avail – he says he’ll be a writer and work from home as they aren’t so concerned about “the gender thing,” Hannah finds a moment to speak to Alicia in private. She tells Alicia that she and Zach won’t end up divorced like Alicia and Peter are about to end up – “marriage should work for us” and not that a couple should work on their marriage. She goes on to explain that her parents divorced yet still see each other. In true young liberal feminist fashion, she boasts of the open style divorce arrangement her folks have. When Alicia asks Hannah why people should even get married in the first place with that kind of thinking, Hannah replies it is because of taxes.

Yeah, that’s the ticket. Marriage isn’t about the sacred institution for a family structure in society, it’s all about the tax break. Hollywood never changes.