Pro-lifers 'Living in the Stone Ages,' According to NBC’s ‘Superstore'

With all the social issues plaguing our newsfeeds, abortion remains at the forefront. For the second time this season, NBC’s Superstore tackles the subject.

On Thursday’s episode, “Wellness Fair,” a false rumor is spread around the staff that fellow store employee Sandra is pregnant and is debating getting an abortion.

Pro-life manager Glenn steps up to defend the fake baby’s rights by going up to Sandra and talking up how great babies really are. At one point he asks, “Hey, what do you think is the worst Supreme Court decision of all time?” Obviously the answer is Roe v. Wade.

Liberal employee Jonah debates Glenn, claiming that Sandra has a choice and he respects her for it. This causes them to get at each other’s throats over the hot-button topic in front of everyone.

Jonah: If it was up to you, we'd still be living in the Stone Ages.
Glenn: Oh, really? Well, if it was up to you, they'd be selling abortions from vending machines.
Amy: Guys, guys, guys, maybe let's not have this conversation out here on the floor.
Glenn: Jonah, you have no idea the toll that an abortion takes on a woman's body.
Jonah: Oh, and childbirth is so easy.
Glenn: Well, at least it's N-- -
Amy: Okay, ah, pretty sure neither one of you guys
Jonah: You know what, Glenn? This is what a feminist looks like.
Glenn: I'm a feminist! I'm a big flaming feminist.
Amy: And that is our skit on the abortion debate.

Of course, they make Glenn look like the less intelligent man, because he’s the Christian conservative defending life. What chance are they giving conservatives? None. 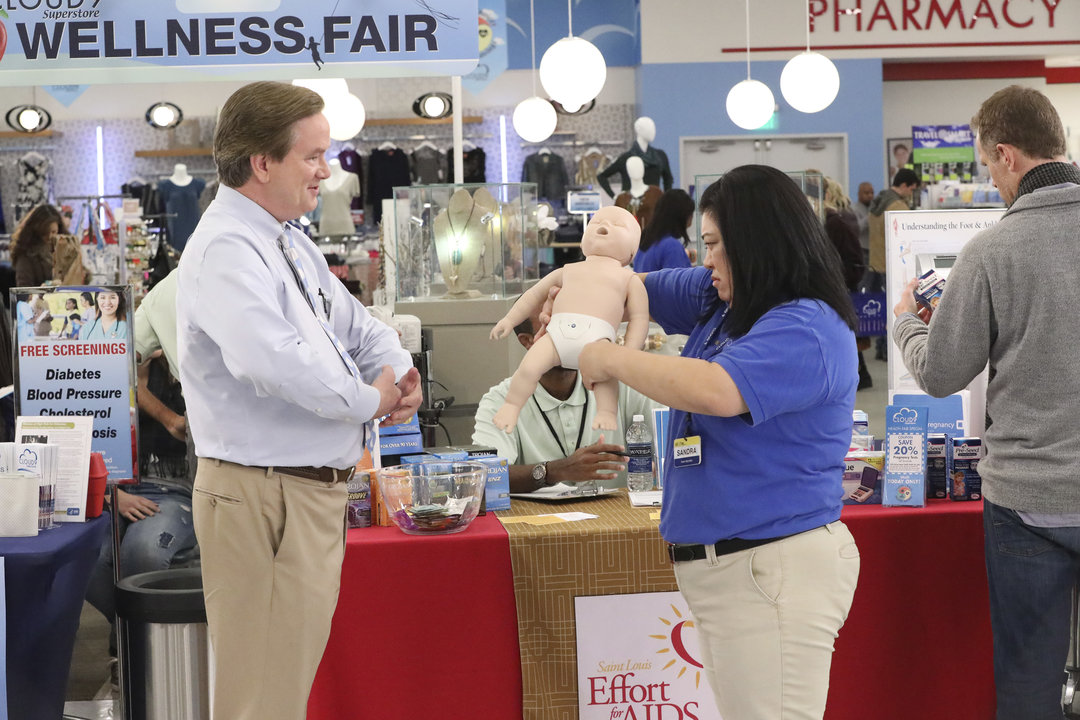 Also, Mateo's relationship with District Manager Jeff is made public amongst the staff as Amy saw them kissing while she was playing hooky. Jeff confirms that he’s gay and with Mateo at an employee meeting but asks everyone to keep quiet because he's not supposed to be dating anybody from one of his stores. This leaves Glenn to look like the idiot, stating, “I just don't get it. If you can be gay, that means anyone can be gay.”

Takeaway from tonight: you're living in the Stone Ages if you're pro-life  and breaking corporate relationship rules is okay if you’re gay.