At least one tennis player is disgusted with Wimbledon’s decision to ban Russian athletes from this summer’s tournament. 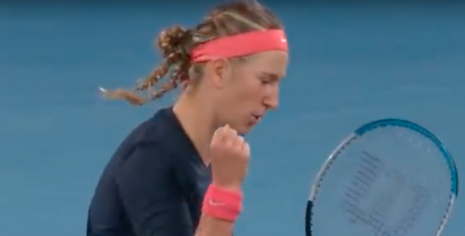 Victoria Azarenka, who at one point in her career was the No. 1 tennis player in the world, wants the Women’s Tennis Association (WTA) to protest and combat the ban.

"If you are asking me if I agree with Wimbledon or see their reasoning after being on a personal call with them, I don't see their reasoning,” Azarenka said. “It does not make sense and it does not connect to what they are saying. I have made my stance very clear on the issue. I will never, ever support war.”

Azarenka gets it. It’s not like any Russian or Belarusian tennis player is a sellout for Vladimir Putin and his political actions, so it doesn’t make sense that anyone born in those countries should have to face this wacky form of punishment.

Related: Wimbledon Allows Unvaxxed To Play, But Not Russians

To make this situation a little more spicy, world No. 92 and Ukrainian international Dayana Yastremska is actually thrilled she won’t have to see any players from these nations in England.

“How would I be able to play against those players at the tournament when all the world is talking about the war that is being fought against Ukraine?,” Yastremka said. “So I think the decision they are making is right. I think the decision they made is very respectful, they did the right thing. What they’ve done for Ukraine is the right thing. Other players (Ukrainian) are supporting it as well.”

Actually, the decision Wimbledon made is quite wrong, and supporting it is equally as wrong.

While the nations in question might be at war at a larger level, these players in question are not interested in harming people like Yastremska (see Azarenak’s quote). To claim that punishing them for something that they have no responsibility for is a good things further compounds the problem.