Wimbledon's senseless decision to ban Russian athletes from the iconic tournament has drawn lots of backlash from the tennis community at large. 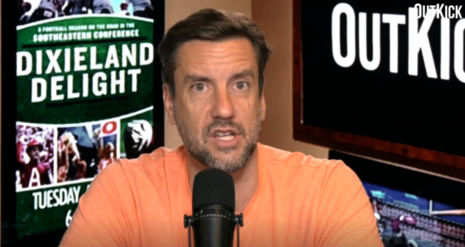 Novak Djokovic, who knows a thing or two about being on the receiving end of stupid decisions from governing tennis bodies, blasted the decision as "crazy."

"I cannot support the decision of Wimbledon, I think it is crazy," Djokovic said after winning a match in the Serbian Open on Wednesday. "When politics interferes with sport, the result is not good."

Boy, is that true in a lot of ways.

Outkick founder Clay Travis called the situation "social justice anarchy," and said that athletes should not be held accountable for what their country does at large.

"I disagree wholeheartedly with many of the choices that are being made by China," Travis said. "I think China is committing genocide against the Uyghurs. I think there should be significant consequences at the global scale against China. I do not believe individual Chinese athletes should be disallowed from participation in the United States."

Travis hits on a key point. Nearly all Russian athletes across sports have said they do not support any actions from the Russian government involving the invasion of Ukraine, and are being treated unfairly for something they are not involved in. No athlete, regardless of the country, should be held to that standard.

The Associate of Tennis Professionals (ATP), the sport's main governing body, also condemned the decision, saying it is a dubious example of how to handle these situations moving forward.

"We strongly condemn Russia's reprehensible invasion of Ukraine and stand in solidarity with the millions of innocent people affected by the ongoing war," the ATP said. "Our sport is proud to operate on the fundamental principles of merit and fairness, where players compete as individuals to earn their place in tournaments based on the ATP Rankings. We believe that today's unilateral decision by Wimbledon and the LTA (Lawn Tennis Association) to exclude players from Russia and Belarus from this year's British grass-court swing is unfair and has the potential to set a damaging precedent for the game."

The fact that we are still having these types of discussions months after the invasion began is ridiculous. Hopefully, this is the last time the sports world gets these situations wrong.