Pressure Mounts To Get Lia Thomas Out Of Pool With Women

A growing contingent of NCAA swimmers have had enough with Lia Thomas ruining women’s swimming not just in the pool, but in other aspects as well. 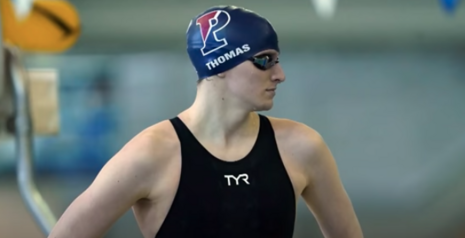 According to one of Thomas’ peers, the transgendered female, who still has male genitalia and is by any objective measure still a man, currently undresses and gets ready for races in a women’s locker room.

Is nothing sacred anymore?

Riley Gaines, a senior swimmer at the University of Kentucky, raced against Thomas just 11 days ago in the NCAA championships and had to experience this awkward dynamic that the moral relevance the NCAA has embraced has caused in collegiate athletics. Speaking on The Clay Travis & Buck Sexton Show, Gaines detailed how repulsive it was being in the same locker room with a man.

Below is an excerpt from the podcast interview:

Clay Travis: So, sorry to cut you off here but I just wanted to build on this a little bit. So you have a biological man who is allowed to come into the locker room that you guys are in preparing to compete, getting ready to swim, and he is using the same locker room as you guys are? And if so what is the reaction in the locker room? Because historically if a man walks into a women’s locker room, that’s a crime in many jurisdictions for virtually everyone out there listening. This is just normalized as, “Oh, he’s going to be able to use the locker room because he identifies as a woman,” and you’re not allowed to say or do anything to disagree with that?

Riley Gaines: Right. I think the NCAA, you know, did make it seem like it was something that, “Oh, we’ll just all share locker rooms!” But, you know, there’s so many girls who, you know, even have faced sexual assault, and this kind of thing can be traumatic on just so many different levels.”

Thank you for stating the obvious Ms. Gaines, because unfortunately, a lot of Americans still need to hear it.

The problem with enabling men like Thomas to dictate our norms is that we destroy basic human barriers that have kept our society functioning. Just 10 years ago, it would be common sense to say that a man cannot be a woman, and that men cannot be in the same locker room as women (or vice versa). When we destroy the basic building blocks of what makes a society function properly, like acknowledging that there are two genders that are separate in function but equal in value, society will devolve into chaos and ruin.

But it’s not just current athletes that realize that Thomas and the transgender agenda are ruining women’s sports. In a letter obtained by The Daily Wire, numerous power figures within the sport signed a letter that called for the NCAA to change the situation, including six-time NCAA Coach of the Year for University of Arizona Frank Busch and USA Swimming Team Director Dennis Pursley.

“It’s hard to express the anguish the women’s swim community has experienced this past week watching the 2022 NCAA Swim & Dive Championships,” the letter said. “On one hand, we feel we are witnessing irrevocable damage to a sport that has transformed our own identities for the better. On the other, we have reconnected with each other in sisterhood after many busy years living our lives beyond the water’s edge.”

When you have such powerful figures as these calling for the situation to change who are unafraid of being canceled, you know that the tides are turning.

Hopefully, pressure like this will be enough to get Thomas out of the pool with biological women and get him back to being mediocre against other men.