In the most unsurprising sports headline of the week, Lia Thomas - a transgendered female - defeated a pool (no pun intended) of real women in the 500-yard freestyle event at the NCAA Division I Championships in Atlanta, GA on Thursday, with a time of 4 minutes, 33.24 seconds. 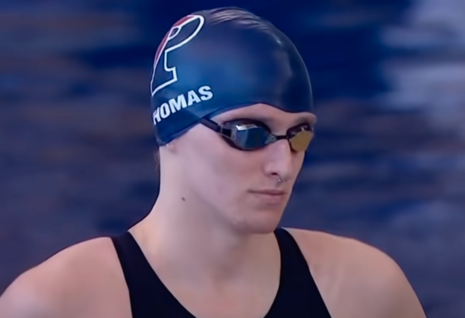 Thomas, who has been rightly scrutinized for being a biological male that the NCAA has somehow let compete in women's sports, defeated the next closest competitor by roughly two seconds and was just a little over nine seconds from breaking Olympic gold medalist Katie Ledecky’s world record time.

While the NCAA and ESPN fawned over Thomas’ “win,” plenty of people condemned Thomas' charade, and several of Thomas’ teammates have anonymously decried Thomas' actions for several months. They don't support what this tranny is doing and that it eliminates any competition before the race has started.

“They feel so discouraged because no matter how much work they put in it, they’re going to lose. Usually, they can get behind the blocks and know they out-trained all their competitors and they’re going to win and give it all they’ve got,” the source said back in December.

The victory also sparked plenty of justified outrage on Twitter.

Get used to seeing this. Things only get more insane from here. https://t.co/NwCwPO6Vzt

Lia Thomas spent 21 years of his life as a man.

He started competing against women in swimming this year and became a national champion.

Our daughter’s sports are not a plan B for failed male athletes.
pic.twitter.com/Lbtos3Ut6g

Congrats to Virginia freshman Emma Weyant, the woman who would have won tonight’s NCAA title in the 500 meter if women’s sports were still sane. https://t.co/KYYKbIr8nt

Even former tennis player Martina Navratilova, a known lesbian and women’s rights activist, was appalled at what is unfolding on the collegiate swimming scene.

"It's not about excluding transgender women from winning ever," Navratilova said, according to Fox News. "But it is about not allowing them to win when they were not anywhere near winning as men."

"You try to keep it as close as possible to what it would had been, were you born in the female biological body in the first place," the tennis star argued. "And even saying that, people take exception to - biological female. People don't even want to use those words. I don't know what else to say. Other than that."

When you start to lose the support of feminists for what you are doing, maybe it’s time to take stock in just how bonkers of a situation we have on our hands.

We have stooped to the level of allowing men who fail competing against other men to mutilate themselves, claim they are women, beat biological women in sporting events, and then hail them as individuals worthy of praise. We have abandoned reason, forsaken truth, and embraced foolishness with open arms.

What a sick world we live in.