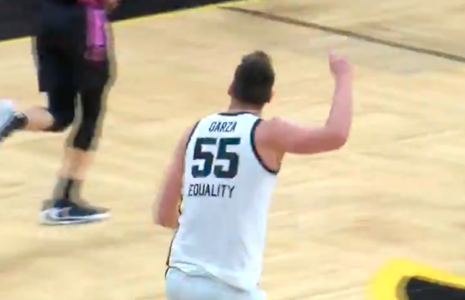 Mixed in with their standard black and gold color scheme was the word “Equality” on their backs, placed below their numbers and last names. It's an obvious nod to social justice messaging. And while most teams no longer use uniforms to promote it, Iowa isn't most teams.

The Hawkeyes started this initiative ahead of the 2020-2021 seasons, when America was in social and political upheaval, and they did more than just have that one word on the back of their uniforms. Messages such as “Peace,” “Love” and “Equality” donned the front of their warm up jerseys, and coaches wore “Anti-Racism” and “Anti-Hate” pins with their suits.

The initiative was supported greatly by former power forward Luka Garza, who won the Naismith Player of the Year Award at the end of last season.

“Luka was one of the main guys that wanted to get this started with us,” then-junior Joe Wieskamp said. “I think having equality on the back of our jersey is a good simple word that means a lot and sends a powerful message.”

Wieskamp is half-right. Equality is something our country should work towards constantly. After all, we can’t be a Republic that stands for “liberty and justice for all” without striving for equality. But the problem with equality according to the social justice movement is that it isn’t really striving for equality at all.

Social justice advocates believe that black people are constantly oppressed. But rather than working towards earning an equal standing in society, a great many of them want to make sure white people have suffered as much as they believe they have (whether in the past or the present), as well as obtaining positions of power they feel have been systematically denied them (like we saw in the Brian Flores case).

To make matters worse, white people - a great many of whom have been made to feel guilty for the sins of their ancestors, whether they committed any "sins" or not - believe that they are doing something good when they promote these messages - like the Hawkeyes. Unfortunately, what they are doing is promoting messages that in and of themselves are admirable, but because they have social justice undertones, they become toxic.

We won’t have to be seeing this propaganda from the Hawkeyes for the rest of the season, though. The Big 10 conference champions lost to the Spiders, 67-63, on Thursday in Buffalo, New York.