Adam Silver, the China-loving, social justice-supporting commissioner of the NBA, is realizing that mask mandates within certain cities are illogical. 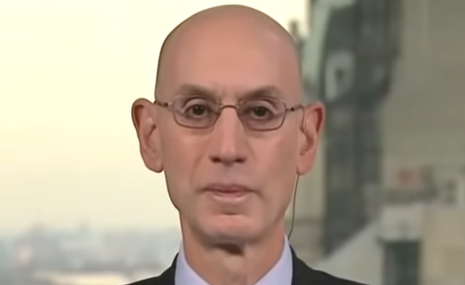 Appearing on NBA’s Get Up show on Wednesday morning, Silver offered his thoughts on the continuing drama surrounding Brooklyn Nets Guard Kyrie Irving, who remains unvaccinated despite enormous pressure to get the jab. He currently can play in away games, but per a bizarre city regulation, Irving cannot play in games in Brooklyn. However, unvaccinated players from other markets can play in the Barclays Center (because of science).

This inconsistent provision for NBA payers apparently even has Silver confused about what the mandate is trying to accomplish.

"This law in New York, the oddity of it to me is that it only applies to home players," Silver said. "I think if ultimately that rule is about protecting people who are in the arena, it just doesn't quite make sense to me that an away player who is unvaccinated can play in Barclays but the home player can't. To me, that's a reason they should take a look at that ordinance."

Silver’s assessment of the situation could not be more accurate. If the premise of the ordinance is to keep people “safe,” then why are unvaccinated players that do not play for the Nets permitted to lace up for games in Brooklyn? What makes exiling Irving a solution to the problem that you are trying to solve?

The bottom line is that the majority of the vaccine mandates that our country and major citizens have attempted to implement start to make less and less sense the more they are applied in real life. If Brooklyn wanted to be consistent, then Irving should be allowed to ball out on his own court and not ridiculed and made an outcast for his personal decision.

Despite all the scrutiny he has endured as a result of his actions, Irving has remained positive and firm in his convictions.

"There's no guilt that I feel," Irving said to reporters in Miami on Saturday. "I'm the only player that has to deal with this in New York City because I play there. If I was anywhere else in another city then it probably wouldn't be the same circumstances. But because I'm there, we have [mayor] Eric Adams, we have the New York mandate, we have things going on that are real-life circumstances that are not just affecting me, bro.”

Here's a roundup of every celebrity caught maskless at the Super Bowl: pic.twitter.com/tufHxq7KYy