Djokovic: I Will Not Get Vaccine Just To Pursue Titles

Novak Djokovic was crucified by the media and deported by the Australian government after not providing “sufficient enough information” to receive a vaccine exemption so he could participate in the Australian Open. Despite all the trials he has had to endure because of his stance, his resolve to defy medical tyranny has not wavered. 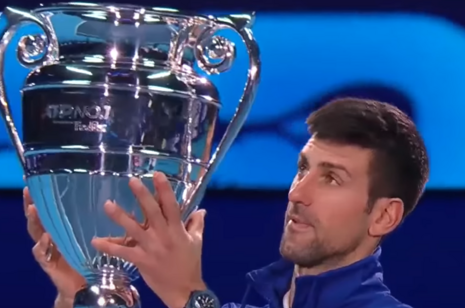 Djokovic told the BBC that trophies are not as important to him as the freedom to choose what goes into his body. He currently sits tied for second all-time in the men’s division with Roger Federer for most Grand Slam titles won with 20, just one behind his contemporary Rafael Nadal (who won the Australian Open Djokovic was forbidden from playing in). But if he is forced to get the vaccine to pursue becoming (statistically) the greatest men’s player ever, Djokovic will not chase that illustrious achievement.

“Yes, that is the price I am willing to pay,” Djokovic said. “The principles of decision making on my body are more important than any title or anything else. I'm trying to be in tune with my body as much as I possibly can.

“I was never against vaccination," (he'd had vaccines as a child), "but I've always supported the freedom to choose what you put in your body."

Now, it might seem like a meaningless charade when a celebrity forgoes a little material gain to stick to his convictions. After all, millions of people in America have lost their jobs because they will not get vaccinated, and millions more in Australia can barely leave home if they are not jabbed. Meanwhile, Djokovic has won enough prize money to last him for life, and his status as a world-class athlete will never be in question.

But it still gives us hope in a world that desperately needs it.

The majority of celebrities today will sacrifice any of their convictions just to roll with the flow of the political and social environment as long as it does not affect their livelihood. But Djokovic’s rigid determination is a reminder that there are still people who value freedom and their beliefs over material gain and who understand that life is more than money, trophies, and fame if you have to compromise who you are to get there.

Plus, Djokovic may have to forgo the highly achievable goal of retiring with the most Grand Slam titles in the men’s category. He is in the twilight of his career, and with Nadal increasing the distance between the two with each grand Slam win, Djokovic’s chances of making ground in the title chase wane with each passing tournament. For a man who is obsessed with greatness and feasts on the thrill of competition more so than any of his peers, this requires a lot of resolve.

Djokovic has said that he would be open to the possibility of getting vaccinated in the future, but he will do it on his own terms and in his own time – something we should all be allowed to do.