Serbian tennis player Novak Djokovic is a brash and unapologetic superstar of his sport who neither backs down when the tennis world views him as controversial or immature, oppressive governments that try to prevent him from playing in tournaments, or from an on-the-court challenge in a heated match. 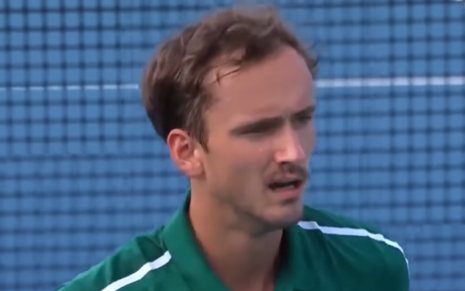 His killer mentality was an inspiration for Daniil Medvedev, who despite being the No. 2 tennis player in the world, was losing two sets to none in a best of five quarterfinal matchup with Felix Auger-Aliassime in the Australian Open. After losing the first two sets 6-7 (4-7), 3-6, the Russian roared back to win the final three, 7-6 (7-2), 7-5, 6-4 to clinch a berth in the semifinals.

When asked post-match how he managed to put together a remarkable comeback, Medvedev said his first thoughts went to how Djokovic would respond in the situation.

"I was not playing my best. Felix served unbelievable; I was all over the place,” Medvedev said. “Then, I thought to myself, what would Novak do? So I said, 'I am going to make him work'. I managed to raise my level and when they closed the roof I was able to go through momentum and I started playing better."

As soon as Medvedev paused after saying “What would Novak do?,” the crowd erupted in boos. Apparently, Djokovic’s competitors were not the only ones who were irked by Djokovic taking a stand against tyranny.

It is quite comical to see that Djokovic has caused quite the stir Down Under, even when he was deported back to Serbia for “not having a legitimate enough reason” to be in Australia to compete in the Australian Open. The man is not even in the country, and he’s still living rent-free in the minds of those who are mad that he had the nerve to stand against Australia’s pervasive and restrictive vaccine mandates.

He’s even influencing the tournament despite not being in it! If Medvedev continues to harness Djokovic’s killer instinct, it seems there might be no stopping the Russian from winning his second Grand Slam title.