In the fallout of Jon Gruden’s firing due to a series of “offensive” emails he sent from 2011-2018, Las Vegas Raiders quarterback offered a solution to make sure this never happens again: initiate a witch hunt on every NFL coach and general manager and see what dirt they can find on them. 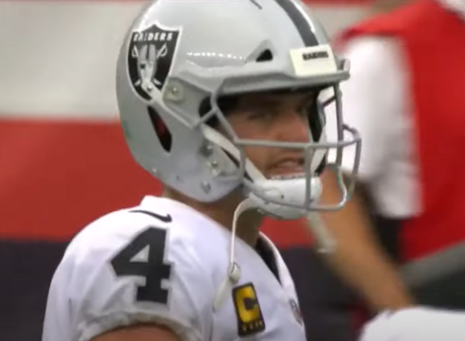 "If we just started opening up everybody's private emails and texts, people would start sweating a little bit. ... Hopefully not too many. But maybe that's what they should do for all coaches and GMs and owners from now on, is open up. You've got to open up everything. See what happens."

Obviously, Gruden was out of line with what he said and the former skipper should have done a better job at maintaining communication integrity in private. But there is an equally big problem in the mentality and maturity of not just the Raiders, but everyone in the NFL who is dancing on Gruden’s grave.

The mentality of the team and league is that through fear and digging up the past, you can intimidate someone – or many people – into changing their behavior and preventing anything bad from ever being said again.

Well guess what? That will not happen.

If there is one thing that all of us are good at, it’s messing up. We are bound to at one point or another (even those who think they are pious and righteous, like Carr and the Raiders’ leadership), especially those in the world of football. The players and leaders of teams who make living organizing and playing a brutal and rough game are usually brutal and rough people. As such, it should be expected that you will hear people say things that make you cringe or that cross a line.

Flushing out the people who have said offensive things in the past will not solve this, and it will likely only replace these "offenders" with other offenders. At some point, players and coaches will have to accept that coaches will say hurtful things and that they must learn to move on.

The fact that players can’t understand this has shown the lack of emotional maturity of those in the NFL – especially in Las Vegas. Carr’s call to action seems to stem from someone who can’t even fathom that there is such a thing as negativity or hurtful words in the NFL and that it can be – and must be - eradicated to make a safe space for people before they can continue living.

But he’s not the only one to emotionally act well below his age on the team. Defensive end Carl Nassib, the NFL’s first active player to come out as gay, took a “personal day” after hearing that the emails came out, which apparently contained anti-gay language.

I’m running out of ways to say that this whole response to the situation is ridiculous. The words Gruden said weren’t even targeted at Nassib, but this softie has to stay home from work because his feelings were hurt? Sounds very unbecoming of someone who was hailed as courageous for making his coming-out announcement.

Until the NFL stops criminalizing people for actions that happened so far in the past, the workplace toxicity they are creating will only get stronger. And until they recognize this, no one will be safe from losing their job.