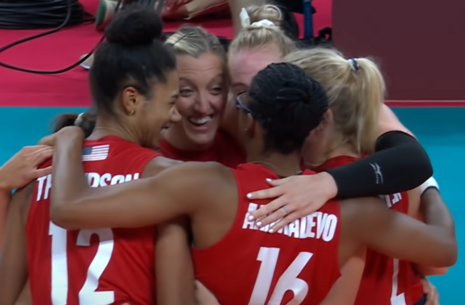 This past summer, the U.S. women’s Olympic indoor volleyball team won its first gold medal in the event. But a left media outlet has turned the celebration of this milestone achievement into a race issue.

ESPN.com writer Mechelle Voepel published an article on The Undefeated that claimed that volleyball is behind the inclusivity curve and has been slow in welcoming black athletes and coaches. Ignoring the fact that there were four Black athletes on the Olympic roster, Voepel used data from the NCAA Demographics Database to show that the vast majority of coaches and players over the past decade in the collegiate scene are white.

One of her other sources, Butler University coach Sharon Clark, said that because volleyball requires a more technical skill set than most sports, that it requires more team participation and fancier equipment. Therefore, it is not more prevalent in lower-income communities means that the sport is not inclusive and throttles out black people from participating.

“Volleyball has not done enough to be more welcoming,” Clark said. “There are lots of great players who make it. But there would be three, four … maybe tenfold more if we opened ourselves up more as a sport."

The assumption here is that black people are being systematically deprived of a chance to compete in volleyball, but that is neither true nor provable.

Let’s address the accessibility issue. Sure, maybe some lower-income communities don’t have volleyball teams or courts, and maybe you need more group participation to work on your skillset. But that doesn’t mean that it’s impossible to do.

Grab a friend, get a volleyball and a net at a sports store, and set it up at your local park and practice serving. If schools have basketball courts, invest in a net and create boundaries for volleyball games within the hardwood (as many high schools already do). It’s not an insurmountable challenge to overcome if people are interested.

But if the kids aren’t interested in volleyball, or if a school can’t afford it with their budget, then so be it.

Second, there is the pricing issue. Clark said that it costs roughly $7,000 -10,000 to play travel volleyball on a club team, obviously a hefty number. But travel basketball teams also cost a lot of money, and that is a sport dominated by black people. Again, this might tie into interest, family expectations, or any other number of factors not considered in Voepel or Clark’s assessment of the situation.

Third, there is the inclusivity issue. If more Black people were placed on Olympic rosters and got the opportunity to play volleyball, that wouldn’t automatically remove the perceived racist nature of the sport (note the word perceived).  It would only accomplish more Black people getting involved, which does not solve whether or not a sport is racist.

The Olympic volleyball team accomplished a truly amazing feat. Let’s just enjoy that and not turn it into something it’s not.