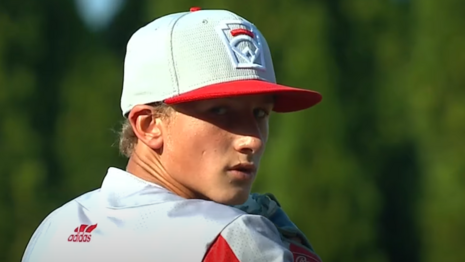 The most recent edition of the Little League World Series in Williamsport, PA, was held under strict protocols to prevent the spread of COVID-19. The protocols were so strict that even parents could barely interact with their sons beyond cheering for them from the stands.

In a convoluted way, some argued that this was a good thing.

Candace Buckner, a reporter for The Washington Post, published an article Saturday that argued that the less interaction the teams of pre-teen baseball wannabes, the more it allowed them to be “silly, delightful, and innocent.” Buckner also stated that it was better for teams to be away from their parents since little league baseball tends to have a large contingent of parents who get far too invested in games and take away the joy of playing.

Buckner likened the negatives of what can happen with parents in youth baseball to adults who, in her words, have made “schools into battlegrounds” and tried to push against mask policies in schools across the country (gasp).

In other words, they need a lot of help.

These kids didn’t get to Williamsport by themselves, their parents got them there through countless hours of carpooling, trekking over kingdom come to get to practices and tournaments, paying for all their gear, and giving up weekends in the hopes their sons could make it to this stage (there are thousands of other teams nationwide who all made the same sacrifices and still had to watch this event form their living room).

And while parents can tend to be somewhat awkward, overbearing, and inappropriate in how they handle themselves while their kids are playing, that does not mean all of them to behave this way. Some are actually positively invested in supporting their kids to achieve their dream of playing baseball. Just because a handful of parents act nasty at some games doesn’t mean all of them are hotheads.

Furthermore, children need their parents' influence in their lives. Buckner argued that the kids are better off without them and they were finally able to have fun because they were barely involved. But that is simply not true.

A big reason why our culture has dissolved into moral chaos is because parents have not raised their children well and have let their families disintegrate. That is not to say that taking your kids to a baseball tournament makes you a good parent, but it does show that they are at least invested in what happens to their kids. And this is far from the only LLWS in which kids have been silly, delightful, and innocent.

Children are better off when their parents are involved in their lives, not the other way around.