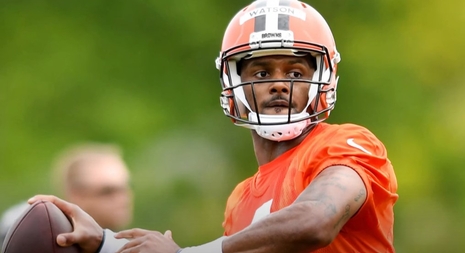 Deshaun Watson’s return to NFL action Sunday may become a case of being sorry what you wished for. At least 10 of the women who accused him of sexual misconduct will be there. So will many people protesting his return to action after an 11-game, slap-on-the-wrist suspension. His former team, the Houston Texans, will be the opposing team.

Welcome to your nightmare, Mr. Watson.

“Some of my clients asked to go,” said Tony Buzbee, attorney for many of the women who accused Watson of sexual misconduct. “They thought it important to make clear that they are still here and that they matter.”

These are just a few of the many women who settled lawsuits against Watson out of court. Outkick blogger Alejandro Avila said they are “hoping to spite the 26-year-old QB for what he allegedly did to them, including flashing them amid massage appointments and making advances on them with the intent to have sex.”

Watson’s accusers will get VIP treatment as they watch the 4-7 Browns take on the Texans from a stadium suite.

The scene in Cleveland will be ripe for more of the protests waged earlier this year after the Browns acquired Watson in a trade from Houston and during his preseason appearances. The Browns have been thoroughly trashed by people who don’t understand why they would put the potential of winning football games above assembling a team of men with integrity. You know, like other men who haven’t been accused of sexual perversions by 30 women. Watson was rewarded for his many alleged misbehaviors with a big fat $230 million contract.

Key members of the Browns’ organization seem to be downright tone deaf to the protests. As a matter of fact, Head Coach Kevin Stefanski met with the media Monday and appeared to be living in a parallel universe.

Stefanski said: “As you know, we had Deshaun in the building for three weeks but not out on the field with us and then the last couple of weeks out on the field. Next step is obviously being out there taking all of the first team reps.

These words mean absolutely nothing to folks who are looking at a bigger picture. Tom Withers, in a story for Houston’s ABC TV13, says Watson won't have a playbook for everything that lies ahead. “The practices, meetings, film work, making handoffs, throwing passes for the Browns, all of that will be easy, second nature. The rest: protesters, heightened scrutiny and pointed questions, will be unscripted.”

There's also no blueprint for the “once-revered quarterback now reviled in some circles,” Withers wrote.

When the Browns acquired Watson months ago, there were a lot of protests. One banner read “22 Women Do Not Lie.” People protested at Coach Stefanski’s home and outside the stadium, too. An online petition encouraged women to “Please let Cleveland know that a person's character is just as important as their ability to play football. Women are important.”

The National Center on Sexual Exploitation released an open letter to the team stating:

At present, it strains credulity to believe that the Cleveland Browns and the NFL as a whole are in anyway concerned about issues of sexual violence and exploitation when we witness your franchise choose to promote and elevate an alleged, serial sexual exploiter.

With visions of Watson leading them to a Super Bowl, the Browns have completely blown off the protests.