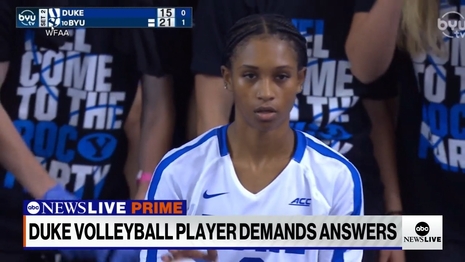 Never mind the darn facts, Brigham Young University is way over-reacting to a racism hoax and punishing the innocent. One man falsely accused of racially taunting a black Duke University volleyball player in a game at Provo earlier this week has been banned from BYU’s campus for life. A fan section at BYU’s volleyball venue has also been moved further away from the court.

Police officers investigated the charge by Duke’s black player, Rachel Richardson, and concluded she was not the victim of racist remarks by a male fan at the match. She falsely alleged he called her a “n-----” and threatened her. Fake U.S. hate crime No. 49,382.

Never mind the truth, BYU delivered its guilty verdict and banishment before the facts were discovered. The lie won out, and the university spun completely out of control in its ridiculous “solutions” to a non-existent problem.

Nolte blasted BYU administrators as “sniveling, fascist cowards.” The market for American racism outweighs the supply, he added. “This country is ridiculously not racist, so awful people are reduced to making false accusations to gain a little attention, collect unearned social clout, and pretend to be oppressed.”

The falsely accused fan, a student at Utah Valley University student, has received no apology from BYU, and, “The whole thing had Jussie Smollett written all over it from the beginning,” Nolte said in reference to the famed victim of a fake hate crime.

The athlete who smeared BYU and one volleyball fan in particular is the one person who committed a crime, Breitbart said. Yet Duke University ignored that, as Richardson has apparently not been punished for lying.

“What should also be a crime is making false accusations that ruin a person’s life, reputation, livelihood, and good name,” Nolte commented.

BYU also over-reacted to the non-incident Thursday by having the visiting Utah State volleyball team enter the back entrance of Smith Fieldhouse with a police escort. Lest anymore non-racist fans pepper the visiting team with non-threats. The BYU student seating section was moved from court-side to the upper deck to protect Utah State players from non-taunting.

Despite the police dismissal of a racial incident, BYU created a fantasyland as if racism had actually been present at the previous volleyball match. Before Thursday’s match, the BYU volleyball team was subjected to a video on inclusion. Team members also wore shirts stating, “Love One Another” on the back. The only thing missing in this charade was an “I Can’t Breathe” t-shirt.

A student who asked not to be identified by name, for fear of retribution, said: “I was disappointed in BYU’s response [to say it happened]. In this country, you are innocent until proven guilty. BYU admitted it happened.”

This whole sorry saga is just another example of how, even when fake hate crimes are exposed, the whole university machine goes into overdrive to manufacture fake concern over non-problems. Just so they can feel good about themselves.