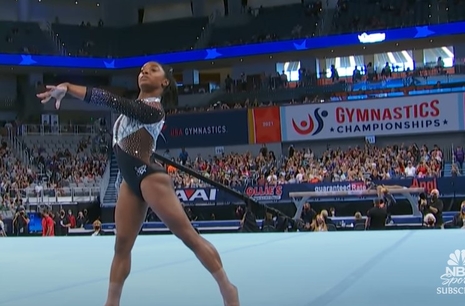 The initial media axes to grind over Brittney Griner’s imprisonment in Russia have worn thin for left-wing media sensationalists. Prompting the other Stephen A. -- Huffington Post’s Stephen A. Crockett Jr. – to turn the issue into a hateful attack on “racists” in the good old U.S. of A.

Initially, the Griner narrative was that she and other WNBA players were forced to play overseas because of pay inequality. Between the U.S. pro women’s league and foreign gigs, they were millionaires, so that narrative fell flat.

… America hates black people, and America hates female athletes. Put them together and you have black women who excel in sports, a community that America finds it very easy to hate.

Crockett further cites Serena Williams and Simone Biles (appearing in photo above) as proof that this hooey is supposedly true. They’ve dominated women’s tennis and gymnastics, respectively, for a long time, but when compared to men, they aren’t included in GOAT conversations. Nor are they paid as well as men.

It takes a lot of work, forethought and calculation to ignore black female athletes so egregiously, Crockett carries on. “It takes energy to hate this hard,” and South Carolina basketball star Aliyah Boston proves that because she was the most dominant player on both sides of the ball among men’s and women’s college basketball players last season. \

Boston was so fantastic and her race is evidently so objectionable that the lefties at ESPN did not even recognize her at its recent ESPY awards program. Case closed on the charge that America is guilty of racial prejudice against black women.

Boston said she’s used to such mistreatment. “It’s just another moment when the disrespect and erasure of black women is brushed off as a ‘mistake’ or an ‘oversight,’” she wailed. “Another excuse for why our milestones and accomplishments aren’t a ‘priority’ this time, even now, 50 years after Title IX.”

After bitterly complaining about hatred for black athletes, Crockett returns to the script: the so-called economic disparity between men’s and women’s sports. Females are forced to eat mystery meat sandwiches, and Stephen Curry makes $471,000 more per game than the WNBA’s annual average salary. Tennis star Roger Federer’s worth is $550 million, and Serena’s is a pathetic $260 million.

Blinded by race, Crockett never comes close to the painful truth of the matter.

Women’s sports do not generate the wealth that men’s sports do, and that’s because far fewer Americans attend women’s athletics or watch them on television. It took decades before a woman could dunk a basketball. Michael Jordan, Hank Aaron, Carl Lewis and Tom Brady were all crushing it in their respective sports, and there’s never been a female athlete or team who could approach their level of play.

In 2019, 11.5 million people attended women’s college basketball games. In the same year, 33 million people bought tickets to attend men’s college basketball games. This past season, the NBA averaged 17,000 fans per game. Last year, the Phoenix Mercury were the only WNBA team to surpass an average of 5,000 tickets sold per game. The WNBA loses $10 million per year and is subsidized by the NBA.

The Left can moan all it wants about hatred for black women, but the facts and figures reveal that Americans realistically view women’s sports as minor league when compared to men’s athletics. With no hatred of black women involved.