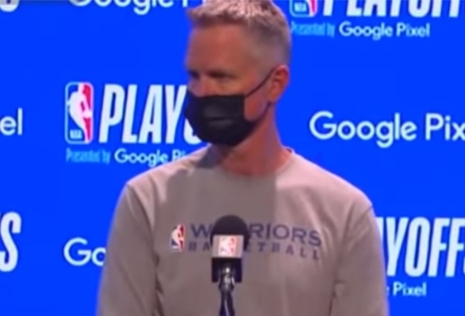 Golden State basketball coach Steve Kerr maxed out on the COVID vaccination, booster shots and masking up. It’s all been for naught, though, because he’s been sidelined with the coronavirus. Outkick founder Clay Travis calls him the ultimate grandstanding virtue signaler.

Kerr, an ardent left-winger, announced Monday he had contracted COVID and is in the NBA’s COVID protocol. His assistant, Mike Brown, coached the Warriors that night in their playoff game against Memphis.

Last September, Kerr told the San Francisco Chronicle, “I believe in the vaccine. Our team believes in it.” He’s not saying now that he believes in vaccines. 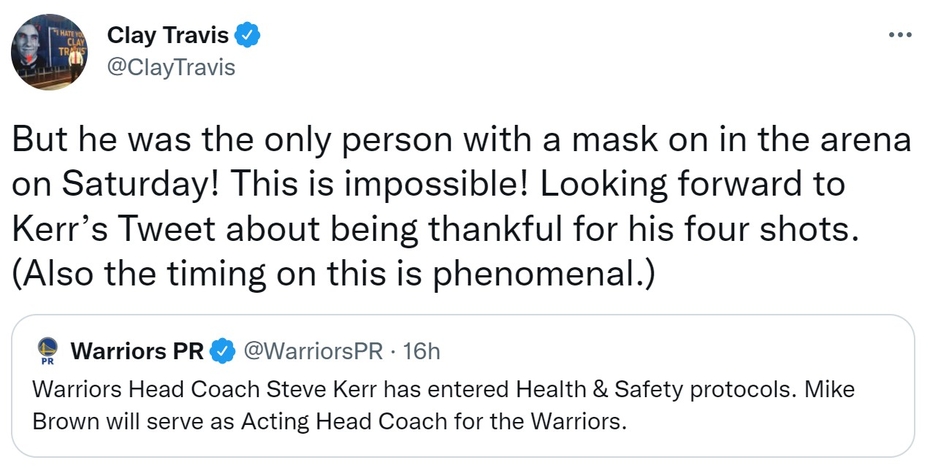 On his Monday broadcast of Outkick The Show, Travis said Kerr had been wearing a mask at Golden State playoff games “for seemingly no reason.” He was wearing them to virtue signal despite data showing that double masking doesn’t even protect people against COVID.

The Daily Mail reported that the study published in Physics of Fluids, demonstrated that wearing two face coverings provide ‘'negligible, if any, increase in protection'’. But perhaps Coach Kerr did his own research!

Travis pointed out how Kerr’s virtue signaling was a fruitless effort. “The entire arena in San Francisco, by and large, almost no one is wearing a mask. Steve Kerr is wearing a mask as the head coach of the Golden State Warriors, and every time he needs to speak, he’s pulling down the mask and screaming out onto the court.”

By wearing a mask, Kerr is engaging in absurdity, Travis added. Masks don’t protect people and they certainly don’t protect a coach who was constantly pulling his down frequently during the games.

In Travis’s view, a mask is “a security blanket for all of the losers out there who continue to believe that masks work, and Steve Kerr is your loser king ….”

“You’ve got Gregg Popovich, Steve Kerr and LeBron James saying they ‘won’t shut up and dribble,’ that they are more than basketball. But when it comes to the genocide in China, they won’t say a word.

“They shut up and dribble for China’s Chairman XI (Jinping, general secretary of the Chinese Communist Party.)”