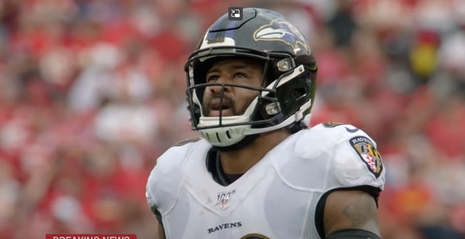 A former member of the Seattle Seahawks’ “Legion of Boom” defense is headed for the slammer. Earl Thomas allegedly violated a protective order for his estranged wife multiple times, and a judge has issued a warrant for his felony arrest. He will be the 12th current or former NFL player to be arrested this year.

Austin, Texas judge George Thomas signed the warrant charging the former All-Pro defensive back, who played for Seattle and Baltimore, with a third-degree felony for allegedly violating the protective order two or more times within 12 months.

The rancor between Thomas and his estranged wife has been playing out very publicly in the past two years. Within the past month, she charged that he sent her these two threatening messages:

“On April 18, police say Thomas texted the woman that he obtained two handguns earlier that day. Later, he texted: "Waiting on hand in foot is why I'll kick ur ass.

“I hope u in the car with him and the kids and yall drive off the road. ... Ima let my momma and my cousins poison they (their children) ass."

Thomas has been involved in multiple violations of law, and he reinforces the moniker that fans continually peg the NFL with: the National “felons” league. Thomas was also reportedly arrested in Travis County, Texas in February 2021 for carrying a weapon unlawfully, but he surrendered the weapon and the charge was dropped.

Out of the NFL the past two seasons, Thomas is hoping to make a comeback. He told ESPN’s Adam Schefter on Friday, "I'm ready. I'm in shape. My timing is on point — I'm proud of that."

Well Thomas is certainly not in good legal shape, though he’d fit right in with a league that is averaging a player arrest about every 10 days this year.

Thomas isn’t exactly the best teammate either. His time with the Ravens ended in August 2020 when he punched teammate Chuck Clark in practice.

It’s a real shame Thomas is wasting his talent. Yahoo Sports’ Jack Baer called him “one of the most well-regarded safeties in the league, a seven-time pro bowler, three-time first-team All-Pro and Super Bowl champion. Now, he's out of the league amid serious character concerns, and this latest allegation won't help convince teams he's pulled things together.”

The Legion of Boom was one of the most effective defensive units the NFL has seen in recent years. Among its members were Thomas, Richard Sherman, Kam Chancellor, Bobby Wagner and several others. That Seahawks team won three NFC West division titles, two NFC championships and a Super Bowl during Thomas's tenure with them.

Thomas was the Seahawks’ first-round draft selection in 2010.