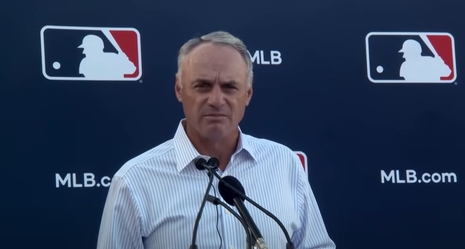 Sports fans are voting with their remote control and playing hardball with Major League Baseball. It’s gotten so bad that a college women’s softball game between Virginia Tech and Tennessee on April 21 out-drew MLB broadcasts over a two-week period (excluding Sunday night baseball).

Sports Media Watch reported that a Fox Sports 1 broadcast of the White Sox vs. Twins game last week drew a microscopic rating of 0.12 and 202,000 viewers. Recent Tuesday games on TBS fared almost as badly – attracting 206,000 and 234,000 viewers for two games.

It only gets worse. No MLB games have drawn 300,000 viewers in the last two weeks.

While Sunday night broadcasts are doing better, those numbers are nothing to brag about. A Brewers-Phillies Sunday night game averaged a rating of 0.7 with 1.11 million viewers. That’s barely over half of what a Padres-Dodgers game on ESPN drew on the same weekend in 2021.

Warner Todd Huston, a sports writer for Breitbart, lays blame for the ratings disasters on MLB going woke. “The rough start to the 2022 season comes on the heels of the woke league’s terrible 2021 ratings,” he wrote. “Last year’s All-Star Game, for instance, earned its second-lowest ratings of all-time.”

The all-star debacle followed Commissioner Rob Manfred’s meat-headed decision (seen in photo) to move the game out of Atlanta because the Georgia Legislature had passed new election integrity laws. He moved the game to Denver, though Colorado has tougher voter laws than Georgia. That decision was widely cheered by the Left, booed by the Right.

e. Last year that number had shrunk to 8.24 million, courtesy of the commissioner’s politically guided blunder.

Baseball clearly chose sides in politics and the culture war, and its clinging to the Left obviously alienated many fans on the Right. Resulting in lost viewers.

It’s not just that fewer people are watching MLB wokeball, the sport is losing to other sports as well. The NBA and NASCAR (ratings are up 17 percent) both out-performed recent baseball broadcasts.

Even the USFL football games surprisingly did better than baseball in their second week, averaging 661,000 viewers.

A Newsmax headline blared that baseball is striking out while pursuing the woke. And fans are choosing to take themselves out of – not to -- the old ballgame when it comes to television sports viewing.