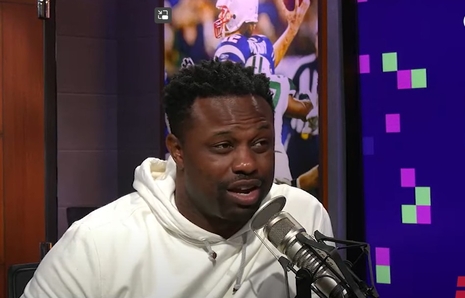 Each of the National Football League’s 32 teams attempted to strengthen their rosters over the weekend by drafting promising young college talent. Former Baltimore Ravens’ player Bart Scott, now an ESPN football analyst, said what each team really needs, though, is a couple more convicts. His outrageous comments played right into the hands of critics who already regard the NFL as the National “felons” League.

Scott (seen above in a file photo) stirred up public relations hornets’ nests for the NFL and ESPN by making his regrettable comments Thursday during ESPN Radio's "Freddie and Fitzsimmons," according to USA Today.:

“You have to get some tough guys and everyone can’t be choir boys. When I was with the Ravens, we had to make sure that we had at least two people on the team with a couple of felonies, just to make sure our street cred was right, when we had to go in these back alleys and have some of these dog fights.

“Sometimes you have to have some people that’s not no choir boys. That’s why you have a strong locker room to hold them in check.”

If anyone knows what it’s like to have notorious thugs on his team, it’s Scott. He played for Baltimore from 2002-08, a time when three all-pro teammates proved they were anything but choir boys.

Future Hall of Famer Ray Lewis was charged with murder in 2000. He agreed to a plea deal and pled guilty to obstruction of justice.

The Ravens’ Jamal Lewis pleaded guilty to drug dealing and was sentenced to four months of jail in 2005.

Baltimore’s Terrell Suggs has been charged multiple counts of domestic violence and was also charged with felony aggravated assault.

Scott went on to comment, “Terrell Suggs beat a dude with a stop sign coming out of Arizona State. You gotta have a couple of guys like that. We can clean them up and get them counseling, but you got to have a couple of goons and you definitely have some goblins.”

Outkick’s Nick Geddes said Scott “is known to have strong opinions.” Make that strong, stupid opinions. He also recommends Viagra for NFL players to help “get that circulation going right.”

A database of NFL “street creds” -- NFLArrest.com -- lists 11 players arrested so far this year. That’s about one arrest every 10 days. Seventeen active or former NFL players have been arrested four or more times. Adam “Pacman” Jones was arrested 10 times during his 14-year career in the National “felons’’ League.

Among this year’s bad guys are Washington’s Deshavor Everett, who was arrested for involuntary manslaughter, the Saints’ Alvin Kamara, the Chiefs’ Chris Lammons and the Browns’ Malik McDowell for assault and battery. Kansas City’s Willie Gay was booked for domestic violence, and Seattle’s Geno Smith got nailed for drunk driving.

There is no shortage of goons with street creds in the NFL. Since 2000, Minnesota, Denver and Cincinnati have each had 50 or more players arrested. Between the three of them, the Broncos won one Super Bowl since 2000. So, despite what Scott says, loading up a team with goons is not the key to winning championships.