NBC's Florio: By Getting Rich In 'Anti-American' NFL Draft, Players Are Victimized 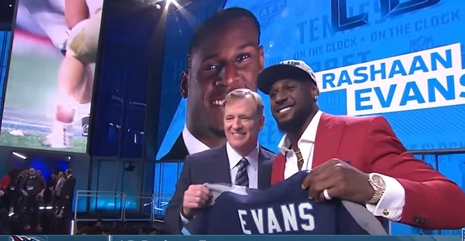 The National Football League instituted the process of drafting college players in 1936, but we’ve just learned from NBC Pro Football Talk’s liberal host Mike Florio that this is an “anti-American” activity. He made this sensationalistic claim in his book Playmakers: How the NFL Really Works, released last month.

Florio obviously timed the release of the book in hopes of making waves as the NFL’s 2022 draft takes place Thursday to Saturday. He attacks the “un-American” draft in Chapter 2, titled, “At its core, the draft is anti-American.” A former labor lawyer, Florio says in an interview with the Awful Announcing blog:

The draft reflects Anti-American values. It restrains movement and flexibility and the inherent realities of self-determination. It forces men not long removed from being boys to move to places they otherwise would never choose to live, often hundreds if not thousands of miles from the places they’d prefer to start their professional lives.

Only in pro sports are individuals drafted by organizations (in above photo, Alabama’s Rashaan Edwards was drafted by Tennessee in 2018) determining where they will live and work, Florio says. “They just have to submit. The players are brainwashed. The fans are brainwashed. We just accept that’s the way it is. You can’t push back against it. Well, you can. They just don’t do it often enough.”

Athletes in football, basketball, hockey and baseball aren’t complaining though. They’re thrilled to learn they’ll get paid millions by living their dreams. The leagues believe drafts even the playing field for losing teams.

Few draftees have protested. John Elway made it known in 1983 he would not play for Baltimore, and the Colts traded that pick to Denver. In 2004, Eli Manning balked at the likelihood of playing for San Diego, so the Chargers dealt him to the New York Giants.

Yet, the NFL draft goes on for the 86th year, and Audacy’s John Healy calls it a “ratings machine for the NFL.” It’s business as usual to the players union and approved through collective bargaining.

Florio insists the draft is a “blatant antitrust violation. It’s no different than in a given community a kid gets a job after school. You have Burger King, McDonald’s, Subway, Taco Bell and Arby’s, and they decide who is going to get dibs on which kid.” Weak analogy. No businesses will engage in a war over minimum wage-earners.

The entire system contradicts the basic principles on which America was founded, Florio concludes in the book chapter on the draft.

Though other businesses and industries don’t draft personnel, Americans often have to change locations to climb the corporate ladder. Like pro sports coaches and athletes, they go where the jobs are and get compensated well for doing so.

The first 27 pages of the Florio book are available for reading on Amazon.