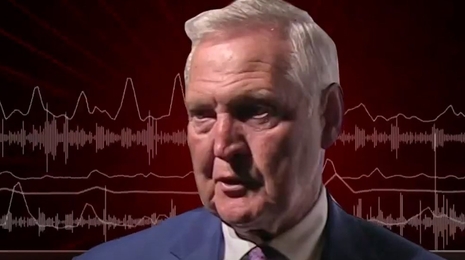 Former NBA superstar Jerry West and his Los Angeles Lakers’ friends are slam dunking on HBO for its “Winning Time: The Rise of the Lakers Dynasty” drama depiction of the Hall of Famer. They say HBO committed a flagrant foul by making it up in its portrayal of West as a drunken, out-of-control rage-aholic.

West played guard for L.A. from 1960-1974 and was a 14-time all-star. The legend’s image appears on the NBA logo. Later he served as a scout and general manager for the Lakers. West’s attorney sent a letter to Adam McKay, the man who produced “Winning Team”, demanding a retraction, apology and damages.

What ticked off West so much? According to the legal letter, HBO defamed his character by portraying him “falsely and cruelly” as “an out-of-control, intoxicated rage-aholic” who “bears no resemblance to the real man.” This was reported by ESPN.

An HBO promo for the program states:

“The cantankerous tortured genius of basketball, Jerry West ought to be the perfect man to build the Lakers into a dynasty — if only he can get past his own worst enemy: Jerry West.”

From the very first episode of the show, West is portrayed by actor Jason Clarke as a man with anger issues, as he smashes up his own office and throws his NBA trophy through a window. Clarke told Newsweek that the show's directors gave him a lot of freedom – if not artistic license on steroids -- and allowed him to make up his own decisions about West’s character and behavior.

Vanity Fair says Clarke’s portrayal of West is “hot-tempered, fiercely emotional and prone to violent outbursts.” West’s attorney says that’s “an egregious wrong on a good and decent man,” and says his client has been harmed by the reckless HBO program.

Former Lakers’ center Kareem Abdul-Jabbar issued a statement of support for West and claimed West was turned into a cartoon character by the show.:

“He never broke golf clubs, he didn’t throw his trophy through the window. Sure, those actions make dramatic moments, but they reek of facile exploitation of the man rather than exploration of character.”

Rothman wrote in the legal letter that West treated him with "dignity and respect." Kupchak noted that West was "always a professional, even keeled, sincere and never heard him lose his temper with anyone."

This seems like more than a he said/she said disagreement. Not when that many people who actually knew, worked and associated with West. HBO admitted to treating its actor with kid gloves and allowed him to assassinate West’s character. That's hardly of denial of the facts presented in West's defense.

This isn’t the first time HBO has been accused of character assassination. Michael Jackson’s estate did the same in 2019, suing the cable network for $100 million.