ESPN's Smith: Kaepernick Knelt For All Of Us, But Backup Remarks Make Me Sick 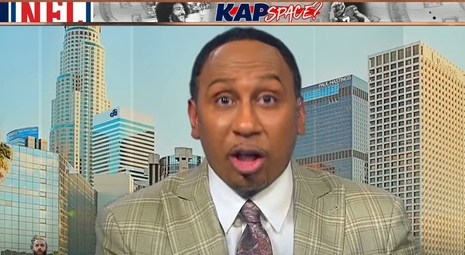 NFL quarterback wannabe Colin Kaepernick says he is willing to accept a backup role with a team, and his remarks infuriated a long-time supporter. ESPN First Take host Stephen A. Smith said Tuesday that America owes Kaepernick an NFL job because he kneeled for national anthems “on behalf of us,” but he also accused the football pariah of not being sincere about wanting to play again.

In was a recent podcast episode of “I AM ATHLETE”, Kaepernick told former NFL players Chad Johnson, Adam “Pacman” Jones and Brandon Marshall that he would be willing to play the backup role of holding a clipboard on the sidelines:

I know I have to find my way back in. So, if I have to come in as a backup, that’s fine. But that’s not where I’m staying. And when I prove that I’m a starter, I want to be able to step on the field as such. I just need that opportunity to walk through the door.

Kaepernick’s career ended after his tumultuous 2016 season of social justice protest. In 2019, Smith claims, he personally helped set up an NFL tryout for Kaepernick. But the renegade ex-quarterback failed to show up for it and bad-mouthed the league instead.

According to Trent Baker’s Breitbart story, Smith believes the activist Kaepernick should still be an active NFL player. However, he termed the backup role remarks “utter nonsense.” Kaepernick blew multiple comeback opportunities, and that makes Smith sick, he said.

Smith has supported Kaepernick since he started kneeling during national anthem presentations and blasting his home country. Smith still believes it’s clear that Kaepernick was black-balled and mistreated by NFL owners. “Colin Kaepernick should have never been out of the NFL. He violated no laws. He violated no NFL bylaws. He got screwed over. Period.”

Actually, he walked away from a lucrative extension with the 49ers and -- imagine this -- nobody else was interested in adding his poison to their locker rooms.

But according to Smith, until 2019 when Kaepernick shunned the NFL tryout, America owed him. Kaepernick is willing to accept “the fact you’ve got to handle things differently, and what do I mean by that? I’m not talking about the kneeling. I’m not talking about the protesting because that’s on behalf of us. And there’s a level of graciousness and gratitude we all owe him. Black people, as far as I’m concerned, America, owes this to Colin Kaepernick. But that was from 2016 to 2019.”

A whole lot of Americans will take exception to Smith's remarks about owing gratitude to Kaepernick. Many football fans feel gratitude only for the fact that he’s no longer playing in the NFL. He did nothing "on behalf of us" in 2016, or since, with his caustic put-downs of our country and his radical activism.